In Timmi's post of October 21st, Emma Goldman, Feminism, and Anarchism, she writes:

Anyway, I think that if more current-day feminists were actually to sit down and read some of Goldman's writings they'd find them both congenial and inspiring. 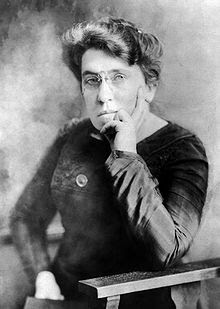 I agree. As a starting point, I recommend her autobiography, Living My Life. It connects her feminist and revolutionary politics to the climate of the time and to her real, bodied experience as a woman. Emma Goldman was filled with fiery enthusiasm and possessed by her ideals, and she acted on them, in a "leap before you look" kind of way that often led her into trouble. She threw her whole self into her politics and did what she thought right, even when it meant going to jail and being deported. And we owe her a great debt for her struggles for the eight-hour day and for birth control.

But, as much as I like Emma Goldman, I don't agree with everything she said and did. I think we have much to learn from her mistakes as well.

One incident that speaks to me is the time she tried to prostitute herself for the cause. (Living My Life, Volume I, Chapter 8.) In 1892, during a time of labor unrest, a man named Henry Clay Frick took over management of the Carnegie Steel Company. He performed atrocities, tossing a pregnant woman out on the streets and hiring armed thugs who massacred strikers, including a little boy.

There was great public outcry, and Emma Goldman and her boyfriend Alexander Berkman felt the time had come to act. Moved by the political writings circulating at the time, they decided that Berkman would assassinate Frick.

"A blow aimed at Frick," she writes, "would echo in the poorest hovel, would call the attention of the whole world to the real cause of the Homestead struggle."

Emma's role would be to raise money for a weapon. But how does a poor woman raise money in a hurry? She chose prostitution. She writes:

My main concern now was whether I could make myself attractive enough to men who seek out girls on the street. I stepped over to the mirror to inspect my body. I looked tired, but my complexion was good. I should need no make-up. My curly blond hair showed off well with my blue eyes. Too large in the hips for my age, I thought; I was just twenty-three. Well, I came from Jewish stock. Besides I would wear a corset and I should look taller in high heels. (I had never worn either before).

After donning the proper attire, she joined a long line of sex workers walking the streets to attract clients. So there went the famous revolutionary, stumbling along in a stiff corset and high heels. A well-to-do gentleman spotted her fear and lack of expertise, and he offered to buy her a drink. So she led him to a dark, crowded saloon. Sitting at a table with a big glass of beer, dressed in fetish wear, she argued politics, telling him about the thousands of women who are driven to prostitution by economic necessity. But he wasn't interested in politics. He gave her ten dollars and told her to get out of the business.

She wired the money to Berkman, who went ahead with his assassination attempt. It failed, and Berkman was arrested. Public opinion, which had been against Frick, now turned against Berkman and the other anarchists. Goldman writes:

Meanwhile, the daily press carried on a ferocious campaign against the anarchists. They called for the police to act, to round up 'the instigators, Johann Most, Emma Goldman, and their ilk.' My name had rarely before been mentioned in the papers, but now it appeared every day in the most sensational stories. The police got busy; a hunt for Emma Goldman began.

So, while she had thought an attempt would rally the working class, it did the opposite. It gave her enemies fuel against the anarchists. It drew attention away from Frick's atrocities. All in all, it was a public relations disaster.

Whatever you may think of the use of violence for political ends, the assassination attempt was a mistake. First, Goldman and Berkman mistook Frick for the real enemy, power itself. Second, she did not take into account the power of the press. And third, she misunderstood the general public, imagining people would be inspired by the act, when instead many were scared. My takeaway from this incident is that whatever our political views, we are always human beings, with human bodies, human failings, desires, fears. When we ignore them, our actions fail.

Fortunately, Emma Goldman didn't give up. She stuck to her ideals and passions, and grounded her politics in our common humanity. She loved, wrote, spoke, and acted with her whole heart, soul, and body. In so doing, she won victories we still benefit from today.

At the end of her autobiography, she writes:

My life - I had lived in its heights and its depths, in bitter sorrow and ecstatic joy, in black despair and fervent hope. I had drunk the cup to the last drop. I had lived my life.

Posted by Timmi Duchamp at 8:45 PM

There are so many wonderful benefits to working in the university library while an undergraduate -- most of all, the job of shelving, that everybody else hated.

Via shelving, among the many works I discovered that otherwise I might not have, or would have discovered probably much later, was Emma Goldman's autobiography - memoirs. It opened a history, a world, a culture, a time, a pantheon of people that I knew nothing about (agricultural, midwestern history of the era up in the High Plains was so different). I won't say I understood it all, or anything of that nature. But it began the process of learning.

This is also how I first ran into Leslie Fiedler as a freshman undergrad ... reading his books for the first, but not at all for the last time by many times. My sophomore year was spent mostly reading every title Fiedler mentioned in Love and Death in the American Novel that I could get my hands on. This university library had almost all fo them.