"Bracing, well-informed, and sort of shocking" 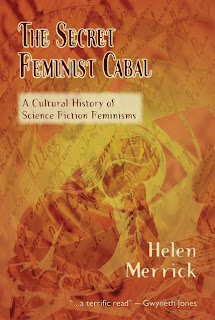 Over at the Agony Column, Rick Kleffel has taken note of Helen Merrick's The Secret Feminist Cabal:

[A]s the work of Mary Shelley indicated, genre fiction was not to be the sole domain of men. And the women who wrote, edited and published had to be tougher, smarter and better than their male counterparts. Where there's a history, there's a story, and the story of women in science fiction spills out in Helen Merrick's 'The Secret Feminist Cabal: A Cultural History of Science Fiction Feminisms' (Aqueduct Press ; December 2009 ; $19). Merrick boldly goes where no ... academician has gone before and brings back an entertaining tale of women writers, editors, publishers and fans. It's SF convention girl-gossip channeled by a university scholar. The results are bracing, well-informed, and sort of shocking. Literature and feminism entwined in an unusual manner in that primordial soup. What emerged was, not surprisingly, sort of magical.

What's interesting to more general readers is the existence of an intensely active, intensely intelligent literary, cultural and sexual discussion taking place in the back waters of a genre that many think begins and ends with, as U2 calls them, "Stories for Boys." You'll meet a lot of wonderfully outspoken women in this book, writers, critics and, critically, fans.

If you'd like to be notified the instant this book is available from Aqueduct (which will probably be a couple of weeks in advance of Amazon and Powells), just drop a note to Tom at info@aqueductpress.com.
Posted by Timmi Duchamp at 5:47 PM