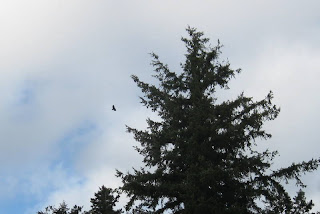 All weekend it stormed-- first rain and later powerful winds battering the cabin almost without pause. I got out on Saturday for a walk, during a pause in the rain, but not yesterday. And then this morning, when I woke, I saw the sun rise as a bright line on the horizon, behind an amazingly calm sea. And then sun flooded my cabin, annoying, actually, since for most of the morning I couldn't seem to get it out of my eyes and my back-lit screens were tough to read. As I prepared, after lunch, to go out for my walk, I laughed at the sight of the REI-style gadgets Tom brought me, which are to hiking boots what chains are to tires. I'm feeling fairly confident I'm safe from ice and snow for this week, at least. Unlike some people, I'm not eager to try out those kinds of toys. 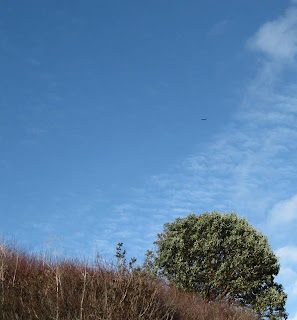 Wow. As I typed those last words, sitting in the work room in my cabin facing an eastern window, a bald eagle flying past caught my gaze. Now I'm watching it pass and pass again, flying just above the trees. I saw it earlier, as I set out for my walk. And then I saw it again, when I walked up from the beach and was only yards from my cabin. In both cases, I pointed my camera at the sky and pushed the button, doubtful the eagle would show up (particularly since with the sun slanting sidelong into my eyes I couldn't see a thing in my viewfinder). But it did, in all four takes. What delighted me most, though, was that the eagle was producing its very strange call-- not a trumpet shriek, but a sort of bassoon-like gulping sound. A comical sound that I doubted could be coming from the eagle (until I went inside and opened a nifty app called Chirp USA and discovered that yes, indeed, that is what eagles are supposed to sound like). My surprise reminded me of the first time I heard the call of a Great Blue Heron-- an ugly hoking sound that seems crazily mismatched with the grace of its form. Its flight, I should add, is nowhere near as graceful as an eagle's-- their liftoff looks impossible, and their flight ungainly. It always seems a miracle they can stay aloft.

The daylight tides this week are too high for extensive beach walking. I'm thinking that maybe one or two days this week I might walk up into the woods behind the cabin. Likely to be pretty muddy. But also likely to have a different set of birds.

I finished reading the Ranciere, which contained an afterward by Slavov Zizek asserting that politics and economics are mutually exclusive focuses for understanding our world. Most of my time, now, is going straight to the novel. The idea of writing epigraphs with fictious sources is concentrating my mind wonderfully. I'm wondering if assigning the writing such epigraphs for one's fiction should be added to my pedagogical toolbox. They could be discarded, afterwards, the way alternative endings can be when I ask students to write at least three different endings for their stories. 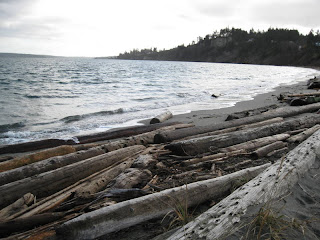 Posted by Timmi Duchamp at 4:24 PM

TV shows and movies use the Red Tail Hawk cry for the eagles since the RTH has a much louder and more impressive cry.

That's perfect, Rebecca. The bald eagle's public profile also has something to do with its iconic use as a USG symbol. The eagle's cry seems at odds with the focus on its fierceness. (Not, of course, that eagles aren't fierce!)