The magic of writing longhand 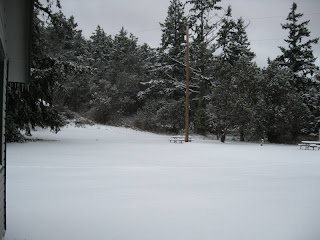 So much for my regimen. Though I made it to the wifi building, I am probably not going to get down to the beach today. Yesterday I didn't go out at all. Partially because I decided to refrain from posting in support of the strike calling attention to the perniciousness of SOPA and PIPA, and partially because I didn't feel up to facing the slipperiness on slopes and hills, notwithstanding my walking sticks. (Now if they had spikes on the ends...) Not many people are stirring in Fort Worden, today. Some workers were out putting sand on the steepest street through the park. But mostly the snow is marked by deer tracks.

Suffice it to say that I've been drafting new material for insertion into the earliest chapters. Although I do most of my fresh writing at the keyboard, when I'm writing material to be inserted I usually write it longhand first and then type it into the file. That is what I've been doing here. I have an idea that I feel a need to write such passages longhand because it allows me to slip past a psychological barrier created (for me, at least) by the seeming solidity of hundreds of pages of printed text. Somehow, it is one thing to tweak drafted text with elaborate line-edits, but quite another to insert new (however little) stories into it. It's as if I'm playing god with an already existing world (even if it's a world I've created-- a world in which I am, in a sense, god).

And now I'm reminded of how, before we had personal computers and before we had personal computers we had "word processors," every new iteration-- whether an edit or a major revision-- of a story required substantial retyping, whether from the beginning of the ms or the beginning of a chapter. Back then, whenever I wasn't sure where the story was going, I would retype the entirety of the scene I was working on, to give me a sort of running start. It never failed. I didn't feel I could do that when I switched to a word processor. So then I'd write out some of it longhand, and continue from there.

Writing longhand has thus come to seem a sort of magic. Some writing still work that way. (Tanith Lee, for one.) All writers, pre-typewriters, worked that way (perforce)-- unless, of course, they dictated it aloud to a secretary. Which makes me wonder if writing longhand is magical only for those of us who habitually write at the keyboard.

Speaking of technology: I hope, should a forecast of freezing rain come to pass for Port Townsend, that the power in my cabin doesn't fail. I brought three candles with me (two of them votive size) and a flashlight. I have lots of tablets and pens. And I'm keeping the batteries of all my battery-powered tech charged up. None of that stuff will keep me warm, though, should an ice- or snow-laden branch of a tree takes the wrong powerline down. I once survived a winter power outage at Kath's house for three days: but then she has a woodstove (and lots and lots of oil lamps). Now that was kind of romantic. (In retrospect, anyway.)
Posted by Timmi Duchamp at 2:41 PM