Snow, sun, and killdeer on the beach 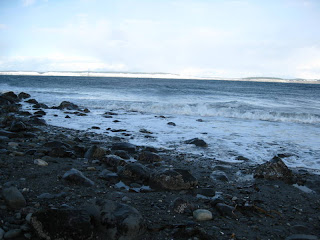 Thinking about Day 2 of my artist's residency, I'm finding it difficult to integrate all that has so fare happened into the scope of a single day. This morning now feels like... yesterday? (Only not the yesterday that actually happened.) When I woke this morning, the quality of the silence made me suspect it might have snowed. When I went to the window and pushed back the curtains, I beheld a muffled gray and white world of snow, as monochromatic as a black and white film. While I made coffee, I spent a few minutes on the Internet via my iPad. Then I took my coffee back to my nice warm bed and settled in to read Ranciere's "The Distribution of the Sensible: Politics and Aesthetics." This gave me much to think about vis-a-vis the interests I mentioned in my post yesterday. But then I asked myself what it might have to tell me about the world and technologies of my novel. Asking this brought me a dazzling insight, one that made me realize that I want/need to insert a new element into the story from its beginning. What a challenge! I've never done that before-- tried to introduce new material and all the perturbations that might follow from it at a such an advanced point of the story. I'm daunted, but also excited. Excited about what this new element can add to the story, excited at facing a new technical challenge. (Understand, I'm not the kind of writer that works from an outline. I generally undergo my conceptual brainstorms as I go.)

Because of the first brainstrom, I was late taking my shower. While I was in it, loving all that deliciously hot water pounding my shoulders and back, I had a second breakthrough anent the novel, again thanks to Ranciere's essay. I was so excited by this point that I decided to have an early lunch of hot, hearty soup and do my walk early. Not only did I want to spend some time outdoors doing something physical, but I figured it would help me begin mulling over these new ideas the easy way-- i.e., in the back of my mind, while the rest of me busied its attention with the world around me. (It's the form of thinking I love best: it's virtually effortless!) 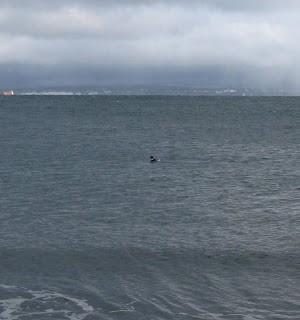 As if to applaud my decision, while I was down on the beach, the snow stopped falling and the sun came out, drenching the landscape (and me) with light. The wind was bitter. But the beauty of the scene ravished me. Six killdeer were hanging out at the south end of the north beach, and one of them enacted a sort of dance with me-- flying past me to settle onto beach a little ahead of me, and then flee with hysterical cries every time I caught up with it, flying in the opposite direction, only to circle around and fly ahead of me on the other side, to settle on the beach a little ahead of me, only to again, yes, circle around behind me and fly again ahead of me... and so on. Also saw a few ducks fairly close to the beach, including a solitary golden-eye (a juvenile male, I think, judging by the size and shape of his white collar) who was doing a lot of diving.

While I was walking on the beach, I found myself thinking about Joan Slonczewski's The Highest Frontier, which I read last week, vis-a-vis Ranciere's essay. I realized that I really liked the inclusion of snippets from main character Jenny's Politics class discussing Aristotle's Politics-- but that I wished that discussion had been a bit sharper and its resonance in the novel's events consequently a bit more powerful. I know full well that though I amplified those resonances in the way that I frequently filled in things that went unspoken by the characters, things that for a reader like me have a ghostly presence (however weak) in such novels, readers who haven't already spent some time engaged in thinking critically about such things would not even have noticed them.

But then so much culture is like that now-- providing the basis for an audience inferring meanings they are always looking for while also providing a comfortable read/viewing for those who miss them entirely because they live in one of this world's many alternate realities where the basis for making such meanings does not exist.

By the time I got home, my cabin was lit up, the kitchen and front room positively peachy. But it's clouded over now, which probably means more snow. Worse, the snowmelt has re-frozen into icy patches, making walking on pavement treacherous. Have I said how glad I am to have my walking sticks with me? 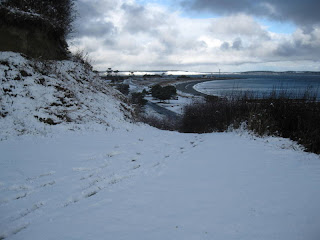 Posted by Timmi Duchamp at 5:35 PM