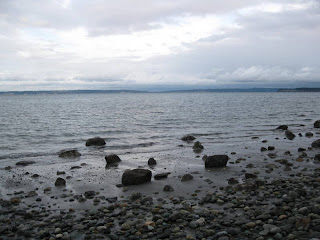 Today is Day One of my artist's residency at Centrum. It's been a little more than a year since I was here last. But I resumed the regimen I follow when I'm here as though I'd never stopped. Last year,  heavy snowfall and accumulation of snow marked my first day, and howling winds my second night. But this first day was marked by the absence of snow-- remarkably, since Seattle, which is south of Port Townsend, had snow when I left yesterday morning and was snowbound when Tom returned last night. But though snow has been and is forecast, I've seen nothing of it here. The sun at its low winter angle (does it rise as high as 20 degrees in the sky now?) lit up my cabin on and off all day and encouraged me to wear sunglasses when I went out for my daily walk on the beach. As for that walk-- there will probably not be as low a tide again during my stay here as we enjoyed today. I could have walked along the south beach all the way to town, if I'd wanted to. (Thought I'd better not press my luck with the tendon in my heel, even though my boots and walking sticks minimized the stress both standing and walking puts on it.) I wondered, as I caught my first glimpse of the water, whether I'd still be able to find ducks out there, since they almost never swim near the beach. Sure enough, sensing their presence came back to me (like riding a bicycle?), and I knew when to check out something I thought might be there but couldn't really distinguish from the sea at the distance, with the binoculars. What is it that my eyes pick up on? It's not a color, or a blob, but perhaps some subliminal thing that cues me that the waves are in some inarticulable way perturbed.

My heart leaped when I saw that again, this year, horned puffins were hanging out in Admiralty Bay. What is it with me about puffins? I took a lot of pleasure in watching eighteen beautiful graceful swans swimming in Lake Washington last month. But seeing puffins-- not beautiful at all, maybe even a bit comically grotesque-- gives me more of a charge. As they did last year, they swam in formation, back and forth, back and forth, giving an impression of avian discipline. 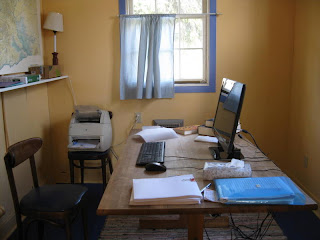 The rest of my day is less interesting to tell. I did some thought-provoking reading for part of the morning and then began reading/line-editing the ms of the novel I intend to finish before leaving here. I was a bit wary when I turned to page one of the ms. I always am, when I pick up something I haven't worked on for a long time. Often such work will read to me as though it had been written by a stranger, though this is more likely to be the case if it's been published (as though my unconscious mind never lets go until a piece of writing is beyond my power to revise). This morning I found that although I had a certain distance from the words on the page (leading me to line-edit them as though they had been written by an Aqueduct author), my mind nevertheless clicked into a certain kind of memory I'm certain all writers must have of the many layers of moments that go into any given sentence or paragraph of a text. It's almost like a body memory. That's perhaps not so off-the-wall, given that what happens as we write is a highly complicated physical process that includes but is not limited to the organ of the brain. It involves not just what our hand or hands are doing during the process, but pulse, blood pressure, breath, hormonal surges, even, perhaps, our very metabolism.

As for my "thought-provoking" reading-- at 8:30 this morning I opened one of the books I'd brought with me-- Jacques Ranciere's The Politics of Aesthetics-- and began with the translator's Preface, subtitled "The Reconfiguration of Meaning." (Yeah, I always read front and backmatter: you never know what gems you might find in the proper margins of the main text.) In his Preface, translator Gabriel Rockhill discusses a subject Ranciere has been working away at for some time. I talked about one aspect of the subject, the aspect I call the problem of intelligibility, in my WisCon 32 GoH speech. I'm also intensely interested in another aspect of the subject (which I wrote about in my essay "Old Pictures: the Discursive Instability of Feminist SF"), discursive instability. Rockhill introduces the subject by way of talking about translation in general as well as his translation of Ranciere's text in particular.

"Translation," he writes, "is not simply a form of mediation between two distinct languages. It is a relational reconfiguration of meaning via a logic of signification that is rendered possible by a socio-historical situaiton. This process can, in fact, take place within a single language, which does not however mean that understanding itself is an act of translation or that we are condemned to endlessly paraphrasing our original ideas. An alternate logic of signification can actually use the same words to mean something entirely different because it determines the very structure of meaning, the horizon of what is qualified as language, the modus operandi of words and sentences, the entire network that defines the process of signification."

It was in "Old Pictures" that I talked about how meanings and connotation of certain words and phrases can shift significantly over a period of decades. Lately I've been thinking a lot about just how radical a shift I can see in my own "logic of signification," as Rockhill (and Ranciere) puts it, from, say, the 1970s through today. It's the "horizon" Rockhill gestures to in that passage that is what each of us who write are perhaps most concerned with. Most of the time we aren't as acutely conscious of our "logic of signification" as we are of that horizon.

Over the last year I've had occasion to read numerous letters (I wrote many and many) and journals from the 1980s, and have been increasingly becoming conscious of feeling as though I need, in a sense, to translate them to the self that I am today-- and of suspecting that much that they are saying is now, crazy as this may sound, unintelligible to me. Would it be possible for me, with effort, to reacquire meanings that now elude me? More interesting for me, perhaps, is another question that's occurred to me because of this shocking gap (that person who wrote all those words, after all, was in a sense-- certainly in legal terms-- me): can any historian read documents produced even a generation or two before and ever fully, richly, understand them as they would have been understood at the time of production?

It's probably not surprising that I'm already finding some of these concerns running through my novel in progress.

Now it's time to go back to my cabin make a vegeatble soup with lots of garlic, ginger, and red pepper. I'm ravenous, and the building I'm visiting to use its wifi is frigid. (My fingers and nose are frozen!) 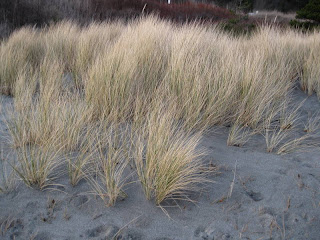 Posted by Timmi Duchamp at 7:11 PM