I didn't go out yesterday but sat tight, waiting out yet another storm. I'd never seen Admiralty Inlet so white with chop before. Today, though, has been calm. And when I walked down to the beach a little after one, there was actually beach to walk on. Best of all, the waterfowl busy in the water were many and varied. I saw my first marbled murrelet, black scoters, and Pacific loons, in addition to the more usual ducks-- buffleheads, common golden-eyes, and hooded mergansers. I spent about ten minutes standing in one place, binoculars lifted to my eyes, watching a duck off by himself-- probably the same one I saw last week, also solitary-- which I eventually identified as a juvenile common golden-eye. Why did I watch him for so long? Because he was dabbling, with his head underwater, for such a long time that I began to wonder if he were dead. (I wasn't sure at that point if it was the juvenile golden-eye because all I could see was his body and some spiky black feathers sticking up.) And then, finally, as I began to think about moving on, he lifted his head out of the water. It made me happy to see he wasn't a dead duck after all. And then I found myself wondering why I've never see a dead duck in the water or on shore yet. Where do they go when they die? Do they wash up on the shore? Do their carcasses get scavegened? Or do they go someplace sheltered when they know they're dying?

It was warm enough that when I reached Point Wilson I was able to sit down on a log, take my gloves off, and jot a few thoughts in a notebook. (Until, of course, my fingers got too stiff to continue writing.) Here's what I jotted: 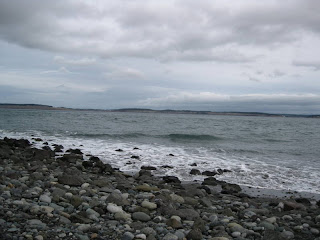 I've been watching the gray green waves roll in so near to the Point, right where the land curves sharply. No matter one's viewpoint, the waves seem inevitably to come in crooked even if they don't always collide at an angle with the ones rolling in a little further south. It occurs to me that so, too, my character's limits are by this point in the novel all too clearly established. The land, unlike the wind, tide, and currents, is a given. Some days the waves comming in at an angle to the the straight line of the beach and waves south of them do collide, with great turbulence--the wind, tide, and currents create a variety of possibilities. Today, though, the difference that the curve of the beach just there makes in the waves seems a thing in itself, without relation to the waves coming in along the straight line of the beach-- perhaps because the latter are barely perceptible as surf. Under these conditions, the collision between the waves coming in at different angles is below the threshold of my perception.

M. is middle-aged. And my ms is at 85,000 words. It is easy to see that her younger self would have scorned her for having gotten into the situation she's in. It's not a matter, in this story, of her being comfortable and not wanting to give up her comfort-- no one would judge her exactly "comfortable" (except by the most moralistic standards). Though certainly one could argue that she's looking for a way to make her life more comfortable. It's more a matter of her having made, for most of her life, one compromise after another, as each new crisis befell her. She began making these compromises by thinking she was being practical and doing what was sensible. But having done so time and again has put her into a state in which compromise is the preferred-- learned-- response to every demand for a decision.

This is the problem with writing middle-aged protagonists who haven't lived their lives in a constant state of self-actualization. Oh sure, a middle-aged character can undergo a conversion experience and be swept out of her inertia. And then, of course, there's the cliche of the midlife crisis. But midlife crises usually result in an attempt to turn back the clock, to shed social and personal responsibility. As someone holding on by her fingernails, that's just not an option for my character. The challenge here, for me, is to find a path that avoids her defeat but is nevertheless true to her character and is not a magical resolution. I have a very clear sense of her limits. But what I need to have now is a better sense of the possiblities within those limits. (She did, after all, start life with some solid resources. Utilizing those resources-- arguably dormant-- must suggest a horizon for the possible.) I hate it when writers suddenly gift their characters with possiblities that ignore their limits, as though when it comes to individuals in fiction, it is an act of good faith to believe in miracles. I know a lot of people insist on this as a sort of moral good. But when I read such stories, I'm left with an unpleasant taste in my mouth, as though I'd been eating saccharine.I damned sure don't want to find myself feeling that way about this novel. 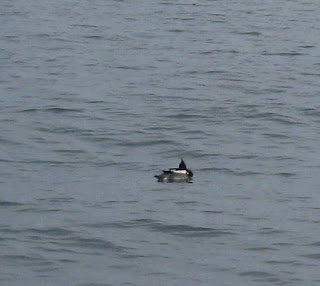 Posted by Timmi Duchamp at 5:02 PM