"The proper representative of humanity" 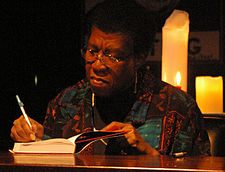 The Nov 2010 issue of Science Fiction Studies arrived in my mailbox this week, and it's filled with goodies. It features a special section on the work of Octavia E. Butler, edited by De Witt Douglas Kilgore and Ranu Samantrai, and a symposium on animal studies and science fiction.

In their introduction, "Memorial to Octavia E. Butler," which places great emphasis on Butler's insistence on "hybridity" as the source of hope and well-being, Kilgore and Samantrai write:


Without writers such as Butler, it is possible that sf would have ossified and remained too closely wedded to an invalidated hegemony. In her life, as in her work, Butler showed us that change comes from unexpected places: from the minority actors who challenge the certainties of the majority and from the violation of the settled boundaries that organize our understanding of the world.

The essays that follow attend to the most readily distinguishable and most disturbing feature of Butler's fiction: the human body exposed as shockingly vulnerable, undone by its availability for violation and control. Each author grapples with the implications of Butler's exploration of our embodied humanity: Why must the body be the index of change? If the body is beyond the governing reach of human consciousness, either because it is acted upon by another consciousness or, more likely, because its own desires collude in its violation, what consequence does that have for agency? And if human agency cannot be located in an autonomous will, then how should we conceive of ethics? To this prospect of a posthuman future, each author adds the centrality of the hitherto marginalized or disenfranchised human being, the queerly raced or sexed or desiring body that now takes center stage as the proper representative of humanity. The paradoxical centrality of the marginal is Butler's version of sf's double-edged sword: her highly speculative alternative worlds are in many ways not recognizable from where we stand, but their very difference makes tem a critical mirror held up to the choices and investments that have made our world.

The articles about Butler's work are:

Benjamin Robertson. "Some Matching Strangeness": Biology, Politics, and the Embrace of History in Octavia Butler's Kindred.

Posted by Timmi Duchamp at 4:40 PM