An epizootic is the "wildlife equivalent of an epidemic." And many birds in the Pacific Northwest and Alaska, it seems, are suffering from avian keratin disorder, which causes beak deformities and could be a sign that a new disease is spreading among birds, or an unknown environmental problem is damaging birds. Andre Revikin at the New York Times offers a Q&A with two biologists, Colleen Handel and Caroline Van Hemert, on the subject. And at Wired Science, Brandon Keim has a short piece-- Alaskan Bird Deformities Are Puzzling, Creepy-- that says basically the same thing, only noting that the black-capped chickadee and crows are especially affected:


About one in 16 crows and black-capped chickadees suffer from a condition called avian keratin disorder, which causes their beaks to become morbidly elongated and crossed.

Rates of the debilitating disorder are 10 times higher than usual. That’s higher than has ever been recorded in any wild-bird population, and most of this rise happened over the last decade. Dozens of other bird species are afflicted. Nobody knows why, but it’s probably not a good sign.

Unlike past outbreaks of beak-deformity epidemics caused by toxins and heavy metals contamination of the environment, which occurred in clusters, this one is widespread and affects species living in different habitats.

Birders in Alaska and the Pacific Northwest are being asked to report any sightings they might make of beak deformities. 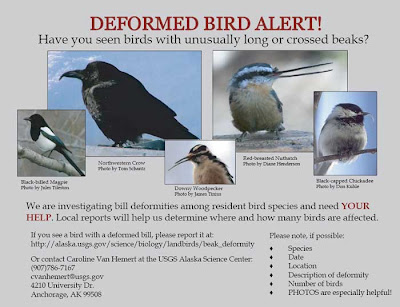 (Links thanks to Eileen Gunn.)