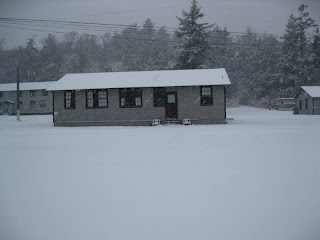 Monday night was very cold, with a wind that scoured the snow and compressed it, leaving grass blades poking up through the snow, succeeded by yesterday's sunny brilliance with one of those dark blue seas that glitter with sunlight. My walk on the beach was exhilarating. Most of the snow was gone from the sand and rocks. Shore birds-- killdeer, I think-- ran before me, occasionally pausing and pecking at the sand-- until finally about five of them took off and flew off together.

Today the sea is a gray blue with a greenish tinge, but the sky is gray (though  an orange tinge lit up the southern horizon until about noon). When I first got up this morning, snow flurries were whirling about, but I'm happy to report that didn't last much past nine or nine-thirty. But it now looks as though it might snow again. And it certainly feels colder than it did yesterday. 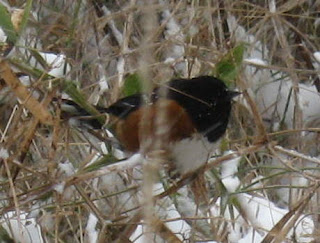 I'm feeling as though I'm getting somewhere with my work. Although I chose the stories for the collection I'm putting together by unthought-out instinct (months and months ago), yesterday I grasped the particular difference putting these particular stories together makes to how I understand them. (Whether that difference will be seen in others' readings remains, of course, to be soon.)  Just as I selected the stories for Love's Body, Dancing in Time on a thematic basis, so I did with these. (My new collection's title gives it away : "Never at Home.")  I hadn't been sure about one of those stories-- what it's relation could be to the others-- but suddenly, this morning, I grasped it. I'd all along been curious why I'd felt it had to be included (since there were others I could have used in its place, and it didn't at surface level seem thematically related), but now it's become clear to me. And since that story is one of the collection's previously unpublished stories (new fiction in the volume will total about 45,000 words) and since I'm still working on a major rewrite of it, that understanding will probably make a difference to the final version of the story (which I hope to have by the end of the week). 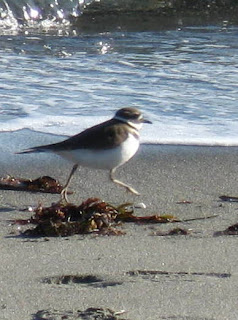 I don't expect work on the collection will take all three of my weeks here-- I'm hoping to be able to get back to the novel. If all goes well, I should be able to use about half my time here for the novel.

Here's something that's occurred to me as I work on this collection. Collections of short fiction come in about four flavors. Collections of the short fiction of dead or very mature authors usually come as either "complete works of" or "best of" volumes. Collections of still-working writers, though, tend to be, on the one hand, basically what hasn't been collected to date, or the best of what hasn't been collected to date [not necessarily designated as "best," however], or on the other hand, stories in some sense thematically related. I believe without question that such contexts make a difference to one's reading of the individual stories. But I wonder if such contexts make a difference to how collections are reviewed, and if readers have a preference for one context over another. Just thinking about the collections on my bookshelves at home, I can't help but notice that collections by working writers tend to assemble whatever the editor thinks that writer's best short fiction is (or else everything they've written but haven't previously collected)-- that thematically selected collections are relatively rare. One reason, I suppose, might be that most writers prefer to put out collections at frequent enough intervals that they don't accumulate a body of stories they can make selections from. Reviewers sometimes draw out such thematic relations in their reviews of collections, but it's often the case that certain writers are obsessed with one or two themes that they write about over and over again, often from different angles.

Anent the photos: the cabin in the snow is the one I'm staying in, and was taken Monday. The bird perched in the berry bush is the bird I saw on Monday-- probably a spotted towhee. The picture of the shorebird is a killdeer, I'm guessing, that I saw yesterday.
Posted by Timmi Duchamp at 2:03 PM