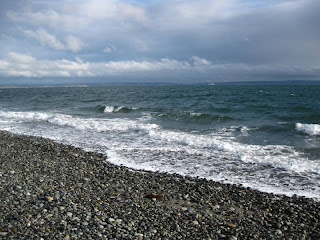 Yesterday the temperature began to rise and the snow started to melt. It was pretty blustery still on the beach yesterday afternoon, though considerably milder than it had been. Using my binoculars, I searched for duck life (which has been scarce around here lately) on the water, and was finally rewarded with a glimpse of three Western grebes, who (as grebes often do) were spending more time under the surface than above it.

Given the impressive rise in temperature, it wasn't surprising that wind pounded the cabin for most of the night. More than once I found myself wondering what I'd do if the wind shattered a window. Sometime between three-thirty and four-thirty the wind finally calmed. And then I slept fairly well. Not that there isn't still wind today, but there's nothing threatening about it.

Today, all but a few patches of soiled and grungy snow have gone. In fact, I saw some tiny mushrooms springing up on the meadow my cabin faces-- as well as a small flower, unscathed from having spent a couple of days at the bottom of a snow drift. (See photo.) And this afternoon I walked along the north stretch of 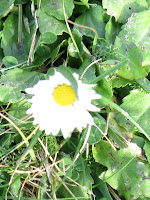 beach, to the point, and loved every second of it, even the walk back against the wind. Lines that I need to write came into my head without my willing them or even thinking much about the story I need them for.

The only birds I saw were gulls, but I came across a couple of jelly fish that had washed up-- one of them astonishingly large. I took several photos of it; in one of them I included the tip of my boot beside the edge of the jellysfish, to give a sense of scale. 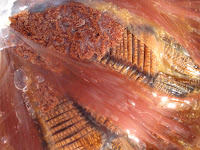 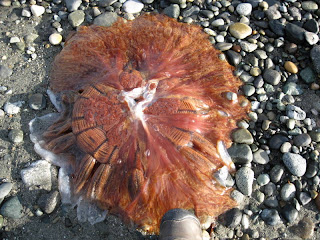 I also got to watch someone surfing with a sail, a beautiful, impressive sight. I'd no idea that sail surfers could achieve speeds faster than skiers towed by speed boats can. I was also amused to see that among the bits of debris that had washed up was something that had been fixed with duct tape. The duct tape had survived the stormy sea, but the wood it was attaching its mysterious tube to had broken. I've no idea what that tube is, but the duct tape certainly did do the job it was employed to do. 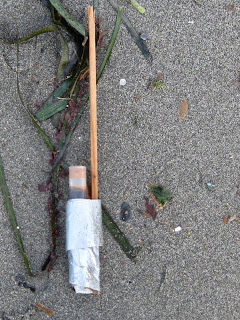 Posted by Timmi Duchamp at 5:18 PM

Tom looked at the photo & informed me that it's a bottle rocket.