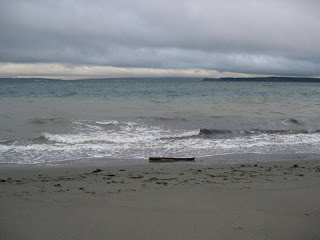 A howling wind battered the cabin again last night, making the windows rattle. Perhaps because of that, I passed one of those bizarre nights when I kept waking up from heavy dreams only to discover that a mere 20 or 25 minutes had elapsed since the last time I'd removed my sleep mask to look at my watch. The wind finally died sometime after five, I think, though I still kept waking up about every forty-five minutes or so. I wasn't surprised to see the beach littered with bits of diverse kinds of seaweed as the tide went out this afternoon. About a 25-foot strip of water nearest the shore was brown with sand that had been churned up in the storm, also, and though the wind wasn't bad, the water was still a bit choppy. And yet I saw lots of waterfowl, though I'll admit it took me a long time to spot them. It's a curious thing how that can work. It was only when I'd walked south about halfway to Point Hudson, pressing against the wind, that I spotted the first the grebes-- through my binoculars rather than my naked eyes. But of course, once I knew where they were, I could see them without the binoculars (though not, of course, well enough to identify them as western grebes). Next I noticed, further out, a line of horned puffins. Beyond them I saw more waterfowl, but too distant for me to make out clearly, even through my binoculars. But I wasn't done yet! On my return walk north along the beach I saw hooded mergansers, buffleheads, a whole lot more grebes, and, finally, Pacific Loons. Were all these birds in those very waters all along? Probably. But they were all getting tossed about on the waves and it was easy to miss them without the assistance of binoculars. Curiously, some of them were preening. Patience, of course, is a primary necessity for birding.

When I left the beach and was walking back up the hill, creeping as quietly as I could because I hoped to spy on the smaller birds that graze in those berry bushes, a young woman jogger passed me. She was listening to music over her earphones and looked at me as though I were nuts. (I was standing stockstill, peering up the cliff face, trying to be utterly motionless and silent.) I had to give up on the little birds, then, but when I reached the top of the hill I almost immediately saw two hawks (rough-legged, I think) and, as I began crossing the meadow toward my cabin, a bald eagle.

Oh, and I had an insight just as I was leaving the beach. What more could I ask for?
Posted by Timmi Duchamp at 5:14 PM