Yachting with the nobs while endangered species burn

There's been much buzz about BP's CEO fleeing the disaster his company unleashed on the Gulf of Mexico to go yachting with English lords, sailing his $700,000 boat around the Isle of Wight. (Getting his "life" back, perhaps?) But much more disturbing is The Raw Story's report by Daniel Tencer that BP is burning marine species caught in their free fire zones without giving anyone a chance to rescue them.

Mike Ellis, a boat captain involved in a three-week effort to rescue as many sea turtles from unfolding disaster as possible, says BP effectively shut down the operation by preventing boats from coming out to rescue the turtles.

"They ran us out of there and then they shut us down, they would not let us get back in there," Ellis said in an interview with conservation biologist Catherine Craig.

Part of BP's efforts to contain the oil spill are controlled burns. Fire-resistant booms are used to corral an area of oil, then the area within the boom is lit on fire, burning off the oil and whatever marine life may have been inside.

That's bad enough. But consider this:

Dr. Brian Stacey of the National Oceanic and Atmospheric Administration told NPR last week that, although there are five different species of sea turtle in the Gulf of Mexico, the majority of the ones found affected by the oil spill are Kemp's Ridleys, "the rarest of them all." 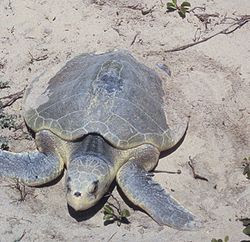 Mike Michael at Gather.com reports that Kemp's Ridleys are listed as endangered under the Endangered Species Act. Harming or killing one "carries stiff fines and civil penalties ($500-$25,000) assessed for each violation. Criminal penalties include possible prison time and fines from $25,000-$50,000."

Michael suggests that, given the size of the fines BP could face as a result of the turtle deaths, the company may be happy to let turtles burn, as it would make it impossible to calculate exactly how many turtles died. He notes that the bodies of dead animals are being kept as evidence to determine how much in fines BP will be liable for.

"Is BP destroying evidence to keep their liability down?" he asks. "Is anyone going to stop them?"

The article is accompanied by a video in which Mike Ellis is interviewed.

Posted by Timmi Duchamp at 6:23 PM

BP and the petroleum gushers on this side, the "Halliburton loophole" hydraulic fracturing on the other side, which has people lighting up their faucet water.

The bells are tolling, and doing so increasingly loudly.

It surely has not escaped your notice, Timmi, that a great Canadian wrote a song that mentions the ubiquitous power of an oil company and includes the line, "Put another turtle on the fire." So I blame you for that being stuck in my head. I want my life back.