The dabbling ducks and goslings of June 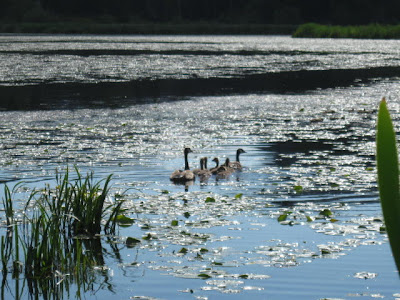 Visits to Union Bay, the wetlands the UW is restoring, are an immense comfort to me. Like many people, I'm finding the ongoing catastrophe in the Gulf of Mexico painful whether I consciously think about it or not. For weeks it has been following me around, making me even sadder than it makes me angry. Finally I realized that the lack of a clear scale adds a deep sense of uneasiness to the sadness.

Now that spring is almost over, life at the fill (as they call it) is a lot calmer. The reeds and grasses have grown tall-- as high as my shoulders, if you can believe that. Many 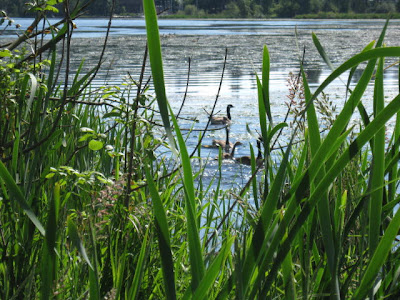 species of birds have flown on. But there are lots of goslings (though they've grown a lot bigger than they were before I went off to WisCon) and ducklings about, and of course blue herons and turtles Over the weekend I acquired a pair of binoculars (a gift!) and some bird books, and was thrilled to identify the mates (polygamy!) of a red-winged blackbird, hanging out together in a tree while the male was off somewhere on his own. (The females don't have black feathers, so this was a revelation to me. Also: although I had noticed that red-winged blackbirds produce several kinds of calls, I had no idea that they produced twenty in all-- the females six, the males eighteen.) I also identified a pair of ducks as gadwalls.

Yesterday the notice board announced 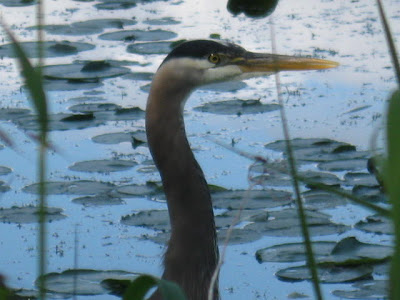 that a green heron had been spotted, so we of course kept a sharp look out for it (according to my books, it's about half the size of a blue heron and much more colorful). Not that I don't continue to love watching blue herons! I rather like that when they aren't staring down into the water, fishing, they are either stalking stealthily about or just standing motionless and seemingly staring off into space, something you'd never catch a dabbling duck or a goose doing.

I can't help feeling that walking around with a pair of large binoculars makes me look as if I'm an authentic birder. (False pretenses!) A woman (also wearing binoculars) asked me if I'd seen any wood ducks. (I hadn't.) And to think just a couple of months ago I didn't know what a coot looked like!

We get Green Herons as well as the usual Great Blues and egrets, in the creek - near the Mississippi River. I also spotted a pair of Black-Crowned Night Herons once.

This year my neighbor saw a baby Blue Heron, and Bald Eagles have flown around the neighborhood (they nest by the river). I hate to think of what a nasty chemical spill could do to all of them...

I hope to see a Green Heron myself someday, Carrie. Egrets we mostly get in passing. (They, like trumpeter swans and snow geese, pass in huge flocks through the Skagit flats, in winter.) But I've seen them often in Louisiana. Bald eagles we have, too-- but they've lately been menacing our blue herons. (If I have to choose, I'll take blue herons over bald eagles any day.)

You're certainly right about photos-- visual images of environmental destruction are always more powerful than verbal descriptions (& is obviously one of the reasons BP has pulled out all the stops to keep reporters and photographers away from the carnage).

I've seen green herons, though not often. Black crowned night herons used to nest on an island in a small park in downtown Minneapolis, so I saw them often. Mostly, though I see egrets and great blue herons. Not that I'm complaining.