When Delta stranded me in Madison after WisCon, I took advantage of my extra day there to buy an armload of books at a Room of One's Own. One of these was Adrienne Rich's A Human Eye: Essays on Art in Society, 1997-2008. After buying myself a pair of reading glasses (I'd somehow managed to lose the pair I had), I settled myself with coffee and a sandwich at Michelangelo's and plunged in. Since it strikes me that the first paragraph of the first essay-- "Thomas Avena's Dream of Order-- might be taken as the collection's emblem, I'll quote it: 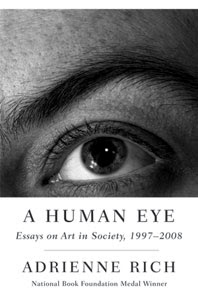 Wherever I turn these days, I'm looking, as from the corner of my eye, for a certain kind of poetry whose balance of dread and beauty is equal to the chaotic negations that pursue us. Amid profiteering language, commoditizing of intimate emotions, and public misery, I want poems that embody-- make into flesh-- another principle. A complex, dialogic, coherent poetry to dissolve both complacency and despair.

There's much in this book about what art is, what it does, and why it matters. And there's a great deal about politics of various sorts. Frequently art and politics are too intertwined in her reflection to imagine ever separating. Take, for instance, "Jewish Days and Nights," which I happened to read only a couple of hours after hearing about the Israeli commando raid on the Gaza aid flotilla. "Every day in my life is a Jewish day, Rich begins. "Muted in my house of origins, Jewishness had a way of pressing up through the fissures. But only in my college-dormitory years did it become a continuous conversation, as Israel was declared a nation-state." (18) For Rich, a significant part of that Jewishness was her father's library, which shaped her intellectual and imaginative life from childhood. "When I think-- daily-- about American Jews and Israel, about Zionism and the Middle East, about intellectual and political life in this country and elsewhere, I start from there. A library. An attitude."(20) Rich continues her reflections by invoking the ethos and poetics of novelist Shulamith Haraven, a European-born Israeli, who as an artist calls herself a "Levantaine," which she characterizes thus:

Authentic Levantism means the third eye and the sixth sense. It is the keen sensitivity to "how," the knowledge that "how" is always more important than "what"; therefore every true artist is a kind of Levantine. It means a perpetual reading between the lines, both in human relations and in political pronouncements--an art no Israeli political leader has yet succeeded in acquiring....

Levantism....is the tacit knowledge that different nations live at different ages, and that age is culture, and that some nations are still adolescent, among them, quite often, Israel. And it is the bitter experience that knows that everything-- every revolution, every ideology-- has its human price, and there is always someone to pay it.

Rich identifies the sense of living differences that Haraven says the artist must be keenly aware of as at the heart of her own Jewishness. "Diaspora...means never always, or anywhere, being just like other Jews. It means class and cultural difference, dissension, contradiction, different languages and foods, living in different ages and relationships to tradition, world politics, and the "always/already" of anti-Semitism." (22) Rich wonders "if there has been anything more impoverishing to Jewish ethical and intellectual culture in the second half of the twentieth century than the idea of Jewish sameness, Jewish unanimity, marching under one tribal banner." She is particularly pained by the neocon redefining of antisemitism as a critique of Israel and the Occupation: "to reduce every question to anti-Semitism," she writes, "is to become infected with anti-Semitism's toxic spirit." (26)

Other essays in the collection engage with the work of Muriel Rukeyser, LeRoi Jones/Amiri Baraka, James Baldwin, Robert Duncan and Denise Levertov, and other poets. A few of the essays aren't particularly about poetry, among them "Three Classics for New Readers: Karl Marx, Rosa Luxemburg, Che Guevara," which she wrote as a preface to Manifesto: Three Classic Essays on How to Change the World--Che Guevara, Rosa Luxemburg, Karl Marx and Friedrich Engels. She begins

If you are curious and open to the life around you, if you are disturbed as to how, by, and against whom wealth and political power is held and used, if you sense that there must be good reasons for your unease, if your curiosity and openness drive you toward wanting to act with others, to "do something," you have much in common with the writers of the three essays in Manifesto.(57)

She points out that all three were fairly young when they wrote their manifestos-- Marx 30, Luxemburg 27, and Che Guevara 37. Not surprising, I guess. A manifesto needs to be bold in issuing its clarion call, not tangled in qualifications and caveats and the intricate concerns that accumulate in the thinking mind, year after year.

They saw themselves not as "public intellectuals" or pundits but as witnesses and contributors to the growing consciousness of a class whose labor produced wealth and leisure for some but who did not share in it it-- a class more than capable of reason and enlightened action, if often lacking the education that could lead to political power....(59) Marx, Luxemburg, and Guevara were revolutionaries but they were not romantic. Their often poetic eloquence is grounded in study and critical analysis of human society and political economy for the earliest communistic arrangements of prehistory to the emergence of modern capitalism and imperialist wars. They did not idealize past societies or attempt to create marginal lifestyle communities but--beginning with Marx-- they scrutinized the ilusions of past and contemporary reformers, idealists and rebels, aware of how easy it can be for parties and leaders to lose momentum, drift off, and settle down within exising structures of power. (It is this kind of compromise that Luxemburg addresses in "Reform or Revolution.")(61-2)

As is often the case in her essays, Rich explicitly makes critical imagination key:

The serious revolutionary, like the serious artist, can't afford to lead a sentimental or self-deceiving life. Patience, open eyes, and critical imagination are required of both kinds of creativity. The writers gathered in Manifesto [Rosa Luxemburg, Karl Marx, & Che Guevara] all speak emotionally of the human condition, of human realization not as losing oneself within a mass collectivity but as a release from the numbed senses, the robotization of advancing capitalist society. Marx writes of "the complete emancipation of all the human qualities and senses [from the mere sense of having]....The eye has become a human, social object." Rosa Luxemburg speaks of "social happiness," of the mass strike as "creativity," of "freedom" as "no special privilege," and of "the love of every beautiful day" required to live in a world of struggle. And Che of the revolutionary as "moved by great feelings of love," though this might "seem ridiculous" in the cynical climate of bourgeois politics; of the need for a "new human being," created through responsible participation in a society in which everyone has a stake. (68)

One last quote, and then I'll stop. In "Permeable Membrane," Rich writes:

Poetic imagination or intuition is never merely unto itself, free-floating, or self-enclosed. It's radical, meaning root-tangled in the grit of human arrangements and relationships: how we are with each other.

If Rich's poetics speaks to you, this book is certainly one you'll want to read-- and read again. It's published by Norton and is now available in trade paperback. It's been a long, long time since Rich was "under 40." And it shows.
Posted by Timmi Duchamp at 7:00 PM

Ah, but you don' gotta be under forty to become a revolutionary: Gandhi started liberating India (and writing "manifestos" on that project) at something like forty-nine, no? And Rosa Parks was pretty much a rank-and-filer until she became famous in her forties, amirite?

Yeah, you are right, Josh. Activists come in all ages. I was just thinking that producing a manifesto probably gets harder to do as you get older.

On a related subject, though: I've been scratching my head at the notion I've been hearing lately that fiction writers are "past their peak" at 40. (As if fiction-writing were like doing mathematics!) I can think of so many counterexamples just off the top of my head that I have to wonder what personal issues the writers who believe this have about their own work...

As is obvious from my comment above, I love playing "counterexamples"! Let's see--the biggies in my consciousness are Cervantes and Bill Gibson, each of whom invented a new genre when past forty. Woolf and Borges might have that distinction too. Following a train of thought from Borges, I find that Eco and Sciascia pretty much got their start after forty--although, like Emshwiller, Sciascia produced some minor stories at an earlier age. UKL too began to hit her stride at forty. Antonia Byatt after forty-five. Seems that in most of these cases, the author in question had a career prior to fiction-writing: military, scholarship, journalism, "women's work"--and (unlike, say, John Barth) turned to fiction when s/he had something to say about the world.

I wrote about the silly "writers peaking at 40" idea last week on the Book View Cafe blog. It seems obvious to me that writing is an art form that thrives on experience, so long as you actually incorporate that experience into your work. Despite John Updike, writers aren't athletes. The curse of sports and physical arts is that in many cases, your body starts to betray you just as you're finally figuring out what you're doing. In writing, fortunately, you're not crippled by the fact that your knees are going and you're a hair slower than you used to be.

As for manifestos: I do suspect that age can tame them, because with age comes awareness of the consequences and the realization that the revolution might not go the way you intended. (There's a line from Saroyen: "And after the revolution everything was the same, except for the young revolutionary, and he was dead.") Real change takes time, more time than most human lives, so it's easy to despair and conclude that revolutions are useless by the time you hit 50 or so. I've lived to see the corruption of many of the changes I thought we were fighting for in the 60s; it gives me pause when it comes to encouraging other people to go out on limbs. But perhaps in another 50 years, the positive results of that time will be more obvious.

As for the Rich essays: What you wrote got me thinking about the importance of the artist as outsider. I shall mull that for awhile.

That's a great Book View post, Nancy. And I learn from a link posted by one of its commenters that Paula Fox started writing novels in her mid-forties too.

Thanks, Josh. There were several interesting names mentioned in the comments. I found the Malcolm Gladwell piece on late bloomers interesting, too -- someone linked to it as well.

Rich: "Public conversation [is] stripped of common imagination of what's 'humanly possible,' of human solidarity, of motives other than fear, shopping, and disgust."