The Imaginarium of Doctor Parnassus II 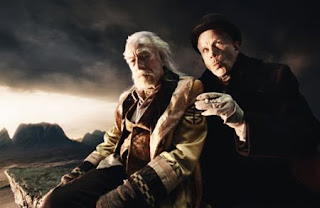 Hold on to your heads, True Believers: it's the charismatic continuation of this provocative post!

The Imaginarium of Doctor Parnassus is yet another Gilliam film about the power of the imagination, liberatory and otherwise, but the stakes are very different from Brazil, Munchausen, and Fisher King. In Brazil, that imagination enables Sam to survive, see through, and (briefly) resist the dominant order. In The Adventures of Baron Munchausen, the imagination enables the title character to defeat some Muslims. Jonathan Pryce plays The Enlightenment in Munchausen, and he is not a good guy: all the Romantic clichés about the Enlightenment being responsible for the Terror and unweaving the rainbow and demanding uniformity and disciplining and punishing come into play.

The source of evil in Parnassus is not the the entertainment industry or the Enlightenment or the state or any force that I’ve seen foregrounded in previous Gilliam films: the source of evil is coercion and paternalistic control, manifested in part via the Charity Model of Disability. Sharon L. Snyder and David T. Mitchell have identified that model as a target of Melville’s Confidence-Man, wherein “Charity becomes a ruse by obscuring rather than exposing the truth of social injustice” (58). Snyder and Mitchell point out that

Historically, one of the primary qualifications of charity, as Jean Starobinski has argued, has been the complete repeal of every other human right . . . Debasement became an in-built feature of the charitable relationship in which the recipient degrades himself and the benefactor grows increasingly exalted. (59)

Gilliam doesn’t go as far as Melville, who “exposes charity as existing fully within the logic of an economic system that makes all economic relationships parasitic, but disguises that fact by marking only some participants ans unproductive and therefore unduly dependent” (60). But he’s acutely aware of the debasement, manifest in the scene where the dwarf is reduced to Crip Minstresly; and the repeal of every other human right turns out to be a big factor in the philanthropist’s agenda.

That aspect of the movie’s thesis has implications for the workings of gender therein. In Gilliam movies, women are often the down-to-earth people who anchor the men and oppose their “lunacy,” in Rebecca West’s sense of the term. Remember the scene in Brazil where Sam lets out a rebel yell at the end of the car chase and Jill points out to him that there’s a policeman burning to death right behind him? Or Sally’s repeated efforts to bring Baron Munchausen back down to Earth and remind him of his quest? Or the Waitress in Fear and Loathing in Las Vegas, who shows Duke and Gonzo that there are real people suffering in the midst of their fun and games?* One problem with that trope is that it tends to circumscribe the women’s lives, most noticeably in The Fisher King, where the heroes’ sweethearts are there basically to support the men's antics and be around when they're done anticking. I guess they contribute in that movie to a care-and-dependency ethic that counters the macho individualism one sometimes sees in Hollywood, but even that aspect of their lives is rendered a stage in Jack’s personal development: as Fred Pfeil wrote, The Fisher King is part of a genre of yuppie-redemption movies “constructing a process of regeneration from which . . . mainstream women are excluded, and . . . rendered superfluous . . . Despite all the indubitable goodness and insight of women, it still takes a man . . . to soften up and save a man” (49-52).

Because Gilliam aspires to deal with the opposition of freedom and paternalism in Parnassus, the movie features moments of female agency that we don’t get in Fear and Loathing and Fisher King. See, Parnassus is all about questioning the discourse of protection. The drive to "save" The Children of The World ends up being a tool for Tony's villainy; and, of course, the princess doesn't end up needing the rescue that the men's egos would like to think she needs. Now, in the real world, one can't easily say that freedom and paternalism are opposed: negative liberty is established by a regime of (often paternalistic) protections. So in what discourses is the repudiation of paternalism central to freedom? The anarcho-capitalist discourse is the first that comes to mind—yer Cato Institute and yer A. Rand Institute make the loudest anti-paternalist noises in the public sphere. But Gilliam’s not going to be a Randian thug. He's too much a stigmaphile, and perhaps too good a shit-detector, to buy into a discourse that lionizes the successful entrepreneur-hero. He’s not a capitalist libertarian or a socialist libertarian, just a hippie libertarian.

The value in that position, whatever its political limitations, is that it allows Gilliam to be anti-imperialist and pro-pleasure, a combination that’s all too rare in the public sphere. Ellen Willis, a kind of hippie libertarian manqué, wrote beautifully about the pro-pleasure stance but took the conservatives’ line on Nicaragua and Israel, and was sympathetic to the “We must save the Iraqis” argument. Edward Said wrote some great anti-imperialist pieces but got very impatient with the later work of Foucault and all that sex business.

Gilliam has said that, by showing the actual gory casualties of a car chase in Brazil, he wanted to say, "Steve [Spielberg], those are real people here!" Now he says the same thing to Roald Dahl. In Parnassus, no one's desire, however superficial, is punished unless they're doing bodily harm to others. Can you imagine what Dahl would do to the ladies who dream of large shoes? Both Right and Left, in this world, want to tell people: no, you don't want what you think you want, that's all "false consciousness."** So letting people want large shoes is pretty rad. Recall Delany in About Writing remarking that what he'd say to Pecola in The Bluest Eye, rather than grieve over her desire to be different, would be, "Get yourself some contact lenses, girl!"

There was, of course, another movie recently about a philanthropist named Tony, one in which a macho protector gets to save a bunch of poor, passive central Asians, which leaves me saying, Iris Marion Young, thou shouldst be living at this hour! But Favreau’s vision is not unique—think of all the Spielberg movies that simplify novels or history in order to tell a straightforward paternalist story, on more than one occasion invoking the old imperial fantasy about rescuing brown women from brown men. Remember "I knew I had to make that movie because I wanted so badly to save Celie"? So Gilliam could credibly be saying, "Steve, Celie doesn't need your help." That kind of thing has, in these times, to be said.

*How the heroine of 12 Monkeys fits this schema is an exercise left to the reader.

**In scary quotes because that's really not what Engels meant by false consciousness.