The Pleasures of Reading, Viewing, and Listening in 2015, pt.3: Tansy Rayner Roberts

So Much Delicious Culture to Be Consumed This Year!
by Tansy Rayner Roberts 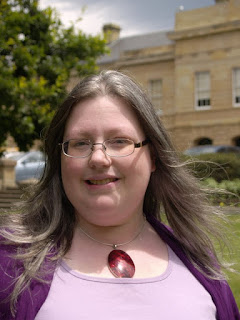 My favourite new podcast is the Fangirl Happy Hour, featuring Renay and Ana. Their love and enthusiasm for the material they review is wonderful; their criticism is sharp and candid. The whole podcast is a celebration of how fans don’t have to agree on everything, don’t have to have watched/read everything SF in order to form an opinion, and how much fun it can be to go against “acceptable fan wisdom” and tread your own path. It doesn’t hurt that they often pick works to review that are the same ones I have either read recently, or desperately want to - more than once, I have hurried up to read a book/comic or watch a show so I can listen to their latest episode. Highly recommended!

My favourite TV watching this year is a cross between Agent Carter and Jessica Jones, two excellently made seasons of television which highlight two fascinating women of the Marvel Comics universe, and also happen to be great drama. Both of them are stories which take place in a superhero universe, but not the superhero genre - Agent Carter is a post-war spy drama, and Jessica Jones is detective noir set in the present day.

This is also the year that I fell in love with and watched ALL of Leverage, a show that left me bereft when it was over, and explains why so many other TV shows try so desperately to capture that magical “ensemble of characters who become found family” dynamic. But with heists.

I’ve immersed myself in comics more than I have in years during 2015 - even taking on the online subscription to Marvel Unlimited, which I highly recommend if you find yourself spending way too much money on digital comics.

In the superhero world, my favourite new comics are the Unbreakable Squirrel Girl (teen-friendly comedy romp adventures) and Bombshells (a digital series based on World War II artwork of DC female superheroes). I have high hopes for the All-New, All-Different Avengers, which had a very solid launch.

In non-superhero comics I can’t recommend The Wicked and the Divine enough - this fabulous story by Kieron Gillen with art by Jamie McKelvie is a raw, magical, filthy glam rock teen coming of age epic with amazing dialogue, characters, art, colours and gut-wrenching cliffhangers. There are about 3 trades so far in the series so it’s a great time to get on board.

Other comics for non superhero fans - Bitch Planet, the harsh and gorgeous intersectional feminist masterpiece by Kelly Sue Deconnick. (Basically Orange is the New Black in Space but without the entitled middle class white girl in the middle of the story) This one has its first trade out, but the individual issues feature amazing feminist articles in the back matter, so don’t be afraid to hit up digital single issues.


For those wanting something a little fluffier, the new Jem and the Holograms comic is simply adorable, a great teen-friendly 21st-century reboot of the classic cartoon featuring girl rock bands, social media, a cutie-pie lesbian romance and more.

Finally, novels - Uprooted by Naomi Novik is my favourite novel of the year, a marvellous fairy tale adventure that felt like Robin McKinley and Diana Wynne Jones got together to storyboard something truly epic. I also really enjoyed Elizabeth Bear’s Karen Memory, Zen Cho’s The Sorcerer To the Crown, and Aliette De Bodard’s The House of Shattered Wings. I continue to enjoy  Ken Liu’s The Grace of Kings, but haven’t got to the end of it yet!

My absolutely favourite thing to read right now is Tremontaine, by Ellen Kushner and her writing team over at Serial Box - a new episode of this gorgeous, swashbuckle-and-spite prequel to Swordspoint is released every week, and I’m getting to the point that I anxiously await each one!

Tansy Rayner Roberts is an author, podcaster, blogger and editor. You can find everything she does at http://tansyrr.com/

Posted by Timmi Duchamp at 8:00 AM