Report on the Tiptree Symposium 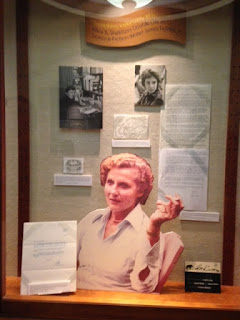 I spent last weekend in Eugene, Oregon, attending the Tiptree Symposium, which was hosted by the University of Oregon Libraries in honor of Alice Sheldon's centennial. In case you haven't heard,the University of Oregon Libraries' special collections include the papers of James Tiptree JR/Alice Sheldon, Joanna Russ, Ursula K. Le Guin, Suzy McKee Charnas, Kate Wilhelm, Suzette Haden Elgin, and other feminist writers who are so critically important to our field and its history. I say I attended, but Aqueduct also attended: Kath presided over three tables with generous help from attending Aqueductistas. We sold several dozen books of our own, plus a variety of Tiptree-related books from other publishers and Tiptree Award tee-shirts.

During the welcome speeches made at the opening of the symposium, Senior Vice Provost Doug Blandy quoted from the introduction to Octavia's Brood in order to emphasize the importance of speculation and "visionary thinking" and declared that the symposium "advances our academic mission." This was a particularly nice touch, I thought, especially since none of the programming carried even a whiff of what most non-academics dislike about academic presentations. (As someone at home with academics, I'm always especially happy to find such harmonious blending.)

The first afternoon featured keynote speaker Julie Phillips, who gave a frequently funny and always moving account of two important correspondences, between Tiptree and Le Guin and Tiptree and Russ. These correspondences record, among other things, how Alli Sheldon spent the last ten years of life--following the disclosure that Tiptree was also, somehow, Alice Sheldon--"trying to find out who she was." After the revelation, she often felt that she didn't have any self at all, that she was caught up in "an animated puppet show." The value of the correspondence in these archives, Julie noted, is about refusing splitting things into compartments and labeling them (something Joanna Russ's letters talk about explicitly). 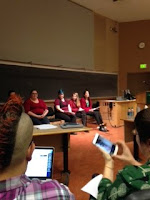 Following Julie's talk, students of Carol Stabile's Feminist Science Fiction course read selections from the correspondence, and Ursula read her letter in response to Tiptree's disclosure of Alice Sheldon. Many of us cried.

Karen Joy Fowler then introduced an audio production of "The Women Men Don't See," complete with sound effects. The actor reading Don Fenton's narration and dialogue was perfect. I've read that story men times, of course, but I found I couldn't bringing myself to leave the auditorium before it was finished. (Two tours of the Titpree Exhibit and Knight Library began as the tape was playing.) I did get to see the exhibit anyway, though, thanks to Julie Phillips doing the honors for me and her family members, who attended the symposium. 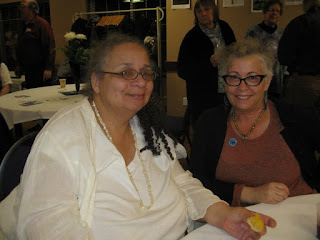 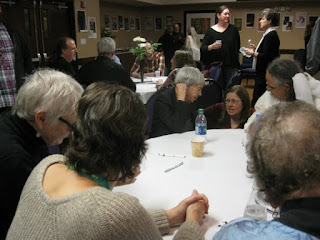 That evening, the Tiptree Motherboard hosted a party, full of conversation, with great refreshments and decorated with gorgeous flower arrangements and posters of Tiptree Award winners lining the walls. 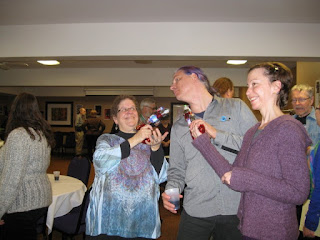 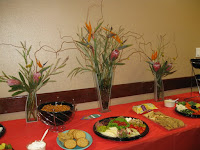 Next morning began with a panel that was originally conceived to be on the subject of "feminist sf publishing." (Somewhere along the way, and without my noticing, "feminist" got dropped.) I was on this panel with Jacob Weisman, publisher of Tachyon Publications (who has done a lot of feminist sf publishing, including three Tiptree Award anthologies), Lisa Rogers, assistant editor at The Magazine of Fantasy and Science Fiction, and Gordon van Gelder, the publisher of 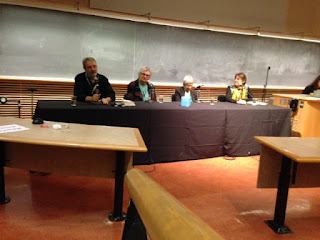 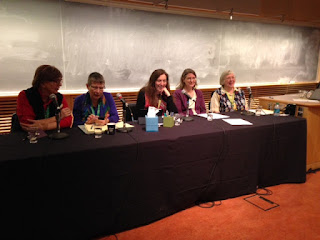 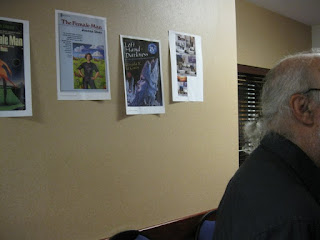 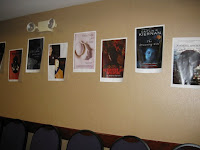 Posted by Timmi Duchamp at 8:12 PM