The Pleasures of Reading, Viewing, and Listening in 2012, pt.14: Sarah Tolmie

2012 In Review
by Sarah Tolmie

I'm a medievalist. It may not surprise you that shockingly few of the books I read this year were actually written in 2012. It did shock me a bit, upon review, and this is certainly one bonus of being asked to do an annual best-of. It showed me quite clearly that I don't live well in any single year. So, thanks Timmi, for asking! I am also a parent of two children under nine and this fact inevitably influences the picture.

Starting with something released in 2012 — though containing stories from a long span, almost 50 years, which reinforces my position that few people's lives are bounded by the calendar year, nor should they be — can I recommend, with fervor, the current two-volume Ursula Le Guin collection, The Real and the Unreal? I only have my hands on the first one right now, and the stories are great, crystalline and lucid, though I have read many of them before. What struck me most, perhaps, is the lingering pathos of her introductory description — straight-up, dry, no special pleading — of the career-long struggle to be taken seriously as a writer of the unreal or speculative and the real or verisimilar. To which I say, WTF? This would never happen to a writer in Spanish or Czech. Here we see the two-edged sword of the metropolitan language. The English tradition bought in heavily to a realistic vision of the novel right from the get-go due in part to a commitment to the plain style, and also in part to the parochial experience of many of the women who initiated the form, like Jane Austen. And since then the vagaries of world politics have kept English on top, with comparatively little need to develop a modern tradition of political allegory such as was needed in Eastern Europe or South America. All that dies out in the English canon along about Milton, that weird sci fi writer who writes about protean alien beings who lived before time and matter deciding to invade Earth . . . And aren't we glad he did instead of writing another earnest tract about Cromwell? Anyway, it has left Le Guin in a bind. It is a bit depressing to realize that her speculative Miltonic flight is being weighed down by the village sensibility of George Eliot. On the other hand, combining those two forces has always been her major strength: the big existential lineaments of things and the close-focus anthropological eye.

We all welcome another two books from her, despite the imperatives that compel their division. This is the kind of career compendium — all her novels aside, this is a massive achievement in short fiction — that ought to accompany her Nobel prize, in my opinion. But alas, that went to Doris Lessing.

2012. Right. What else? Like most people I know, I no longer watch movies. They are moronic, expensive and a huge hassle. Things worth watching are available for download. Otherwise, forget it. I will make an effort to see Pixar's Brave, however, as they consistently get things right. The brilliant Chaplinesque Wall-E would be my choice for the best American movie of the last 20 years.

I have been watching Game of Thrones and enjoying it a lot. The cast is doing a great job and the writing is unusually good. Likewise, the Danish series Forbrydelsen (The Killing) is addictive. (I mean the Danish one. Its US counterpart I have never seen.) Sarah Lund is the Jane Tennyson of our era, but with the Asperger's twist that seems to be defining contemporary Scandinavian femininity. Also Danish itself is fascinating. From the historical linguistics point of view, it gives me a giggle every time to reflect that the Danes sailed over to England in the 8th century or so and dumped off all their consonants, as there are clearly none left now.

And of course I should put in a good word for Doctor Who. My husband is a rabid fan from childhood, so we of course watched the whole series revive under the hand of Russell T. Davies and the fraught postcolonial Doctor that emerged. Despite a few wobbles it was an excellent update to the institution. Steven Moffatt was his best writer and the series has continued strongly under his leadership. (This would also be the time to mention the astute and hilarious Sherlock, which he has co-written since its advent in 2010: only show I have ever seen that makes intelligent use of augmented reality motifs.) As always we will make it through the holidays largely on the strength of the Christmas special.

Richard Dawkins and Dave McKean's iPad book The Magic Of Reality was released in 2011 but was in the hands of my six-year-old a lot in 2012. He has become a champion virtual frog breeder thanks to an evolutionary game in one of the early chapters. I remain unconvinced that A. this represents interactivity greater than reading, and B. it has taught him much about evolution. Nonetheless, he has enjoyed himself a lot and it has gotten a good piece of design in front of his eyeballs. Kudos to the wonderful Dave McKean for this project. I remain, as always, ambivalent about Dawkins, however. While his overall work is consummately sane, informed, and entertaining, and he is definitely fighting the good fight against anti-scientific cretinism, he is also obtusely snotty about the critical powers of myth and storytelling, resources upon which his whole enterprise relies.

Another 2011 release that was big in my house this year was Hugh Acheson’s relaxed and enjoyable cookbook A New Turn in the South. The world is a welter of cooking pundits and most of them I now ignore. Hugh’s book came into my hands because he is my colleague’s brother and I used it and riffed from it all year to great effect. I liked the recipes and the style, as well as its odd cross-border cultural location, written by a Canadian who has become a devout southern US locavore. 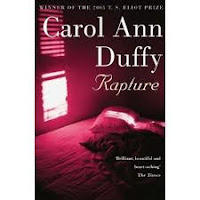 As an inveterate sonnet writer, I have to recommend Carol Ann Duffy's Rapture, which is simply kickass. As she's the British poet laureate, and it came out in 2005, chances are you've read it already. But just in case you haven't, do. I wouldn't have crossed the street for Andrew Motion but this is the real deal. And read anything by Jorie Graham. Anything.

On my to-read-before-I-retire list for this year are Stephen Greenblatt's The Swerve because I've always been a fan of Lucretius and because New Historicism was the vogue of my grad school years; Dear Life, the new Alice Munro collection (she does not seem to have retired after all, to the relief of all of Canada) and the new Zadie Smith.

After this I degenerate into talking about my children and their compositions. My eight-year-old, an inveterate reader of Gilda Joyce and the Sisters Grimm, is now writing her first novel about A Haunted House At The Westernmost Edge of Town and telling nightly "legends" to her agog younger brother. He is still at the surreal and unedited six-year-old phase, mostly making up words to traditional songs. The latest, a variation on "A Hunting We Will Go" incorporated the unforgettable lines: "we'll catch a rabbit and suck off its babbitt/ and then we'll let him go." I leave it there for 2012.

Sarah Tolmie is an Associate Professor in the English department at the University of Waterloo, where she teaches medieval and renaissance literature, general British literature, and creative writing. She publishes on the bizarre late medieval visionary poem Piers Plowman and its relations to logic and language and has been developing a virtual reality translation of the text — what she calls a “wearable poem” that the reader walks into via a head-mounted display — called the Salvation Suit, since 2009. This technological experiment has led to several other research-creation projects, among them building an augmented reality angel out of a human dancer and a pair of dynamically-responsive virtual wings, and making a whispering gallery of voices saying “goodbye” with a Kinect, an interactive theatre piece about mourning.  Aqueduct Press will be publishing her debut novel, "The Stone Boatmen" in 2013.
Posted by Timmi Duchamp at 6:00 PM