The Pleasures of Reading, Viewing, and Listening in 2012, pt 2: Gwyneth Jones 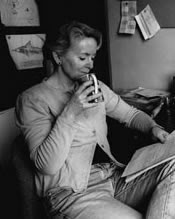 Looking back, I managed to get out of the house for an unusual number of new movies this year, but I don’t know if that reflects a good year, or the fact that my son Gabriel, indefatigable movie-fan, was at home, and Brighton’s only Art&Indie house is at the bottom of our hill. The ones that stand out for me are Sean Durkin’s Marsha Marcy May Marlene, the short-on-answers account of how a young woman, already robbed of personhood for reasons only hinted at, gets recruited to a brutal little backwoods cult, and ends up (we glimpse, as the credits roll) bringing the horror back home to her own family; where maybe it began? This is so much a movie for reading between the lines, I felt at times that my own reading was a found object, but the artful, slow-building, bewildering wrongness is definitely really there. Fine performances from Elizabeth Olsen as the identity-stripped girl, and John Hawkes as the (somewhat generic!) Evil Psycho Patriarch.

Also Headhunters, a very black comedy adapted from a Jo Nesbo thriller, was so much fun. From my blog: “I feel many will agree that the passage involving the Vicious White Attack Dog, and the Venal Farmer's Horrible Old Tractor, had a special and glorious charm”. A guilty pleasure. A Royal Affair was unexpectedly engrossing, an intellectual and affecting costume drama about mad King Christian VII of Denmark, and the lovers (the king’s tutor and his wife) who used their power over him, and his affection for both of them, to transform the grim fate of all but the ruling class, in feudal/oligarchic Eighteenth Century Denmark. Of course it can’t last, and of course there is hell to pay, but what a story. The arrogant carelessness of the young Utopian couple is heart-breaking, the coda rather wonderful. A true story? Well, maybe. To a surprising extent, maybe yes. Mikkel Boe Følsgaard was absolutely fantastic, and touching, as the mad king.

Honorable Mention to Weekend: the simple story of two young men, picking each other up at a club in Nottingham and spending the weekend together while accidentally, truly, falling in love. Refreshingly, no fuss is made of the sex scenes, and they are frank as they would be for a heterosexual version, without any apology. Unusually, for the British Midlands Realist school of filmmaking, Weekend is not aggressive, distressing, miserable or violent, and nor is it sugar-coated. A gentle gem.

The line between right and wrong is not drawn between the sexes, especially not in Eighteenth Century Denmark, but the pathologies of the traditional sex roles are harshly spotlit in Marsha Marcia May Marlene. Child soldiers, sexual slaves, utterly corrupted, corrupting in their turn... I thought of that feral patriarch, and his awful, sinister, coaxing, assistant wives, when my library-book reading lead me to Aminatta Forna’s beautiful, lyrical novel The Memory of Love, and Elsa Osorio’s dry, docufiction style My Name Is Light (read in translation, nb). Respectively, an unravelling of the terrible recent past that the people of Sierra Leone have to live with (and mostly prefer not to think about), and a forensic examination of what happened to the children, in the tragedy of Argentina’s “disappeared” generation, these are two gripping modern history books, and  I think they’re better for being fictionalised. Fiction, ironically, can tell more of the truth and leaves the most awkward questions fewer places to hide.

In March I went to Katwijk aan Zee as the guest of Beneluxcon. I’d decided to speak on “Ghosts” with an emphasis on M R James and Arthur Machen. The coast of Suffolk, the Grandmaster’s favourite haunting ground, is just across the North Sea from Kawijk, and has the same character, in season. (Out of season it’s a pretty and cheery holiday spot): lost villages, the mysterious dunes; the long, silent, chill and desolate sands). This gave me an excuse to revisit Sheridan Le Fanu’s classic Irish novel of macabre, not as well known as some of his works: The House By The Churchyard. There’s a rather nasty ghost story embedded in these expansive pages, and a murder mystery featuring startlingly modern detective work, but really I love it for the atmosphere of a bygone age recollected (Le Fanu always liked to set his stories in the past): lost souls, who strive in vain to save themselves from damnation; the fragility of innocence. Also highly recommended, and a genre novelist completely new to me, Caitlin Kiernan. I very much admired (and envied) The Red Tree, an assured and scary psychological updating of Lovecraftian themes. I read The Hunger Games, before I went to Benelux, and enjoyed it —a lot more than I liked Twilight, anyway, though maybe not as much as I liked Susanne Collins’s Gregor The Overlander series. Later I thought the movie was very successful. Jennifer Laurence is a great choice for Katniss Everdeen, and the visual medium can skim over the details of outfits, manicures and hairdos which become tedious in print. My problem with the trilogy (shared by young adult readers I’ve talked to) is the third episode, in which Katniss pretty much appears only to tell us, every so often, that she is bored out of her mind by all the politics... I hope the moviemakers will do better.

Finally, I’ve spent most of this year on short stories and on the project of getting my backlist into eprint. For the last few months —far longer than I intended!— I’ve been obsessed with the remastering of Divine Endurance (1984) and Flowerdust (1993), “companion novels” set in a far future South East Asia. I’ve got the single narrative, single volume edition up on Kindle now, but on the way to this happy conclusion I was lucky enough to spot The Garden Of Evening Mists, Tan Twan Eng, on the Booker short list, and surfaced for long enough to snag a copy. Set in the Cameron Highlands of the Malaysian Peninsula, this is partly the summing up of a Malaysian-Chinese judge’s life, at a time when she knows her mind is on the brink of dissolution, and partly a reconstruction of yet another savage, largely forgotten “low intensity” war; the Communist Insurgency in Malaya in the fifties. Very beautiful, absorbing, and evocative. I didn’t get the tattooing strand, but I really loved the rest.

Best Theatre, The Heresy of Love (a new play by Helen Edmonton based on the life of Mexica poet and thinker, Sor Juana Inés de la Cruz) at Stratford.

Best visual arts show: Bronze at the Royal Academy, by a mile. On a much smaller scale, Lindsey Seers' immersive, disorienting, and gender-bending Entanglement at the Turner, Margate, in July.

And if by any chance you think Modernism isn’t too weird... Or only for old hippies... Brighton’s Music Of Our Time strand, in the Brighton Festival, in May, “The Musician’s Body’ made a huge impression on us. A highlight was virtuoso of the seventies, Frederick Rzewski, playing his epic masterpiece The People United Will Never Be Defeated (variations on a Chilean revolutionary chant), but MOOT goes from strength to strength. Jonathan Powell came to Brighton to play Messiaen's Vingt regards sur l'enfant Jesus in October, which was just fabulous.

This week, but too late for this deadline, I’ll be going to MOOT’S Christmas with the Schoenbergs (more Modernism) and getting harrowed and torn apart by Hanecke’s Amour. It’s for my own good.

Oh, I see I missed out non-fiction reading. And TV. Never mind. Enough is enough.

Gwyneth Jones is the critically acclaimed author of numerous novels, short stories, and essays. She has been honored with the Philip K. Dick, World Fantasy, Clarke, and Tiptree Awards for her fiction, and the Pilgrim Award for her criticism. Her most recent books are Universe of Things,  Imagination/Space: Essays and Talks on Fiction, Feminism, Technology, and Politics and Spirit, a novel.  She lives in Brighton, England.
Posted by Timmi Duchamp at 6:00 PM