The bad news is, I'm down sick, maybe with flu, and not feeling too thrilled to be sitting at my desk. The good news is, Narrative Power, the book that spun off a lively (some would even say contentious) WisCon 32 panel on narrative politics, has arrived here in Seattle (in time for Potlatch!), and I had the stuff posted below all prepared and ready to go in advance. (Which means-- big yay!-- I can crawl back into bed soon.) So here it is:

There is a reason for the existence of clichés: the easiest stories to tell and to listen to are the ones that everyone knows already, the ones that reinforce the listeners’ beliefs. The less sophisticated the listeners are – the younger the children – the less likely they are to tolerate change or ambiguity. A bedtime story about Flopsy, Mopsy, Cottontail, and Richard will drive a three-year-old slightly bananas if she knows anything at all about The Tale of Peter Rabbit. (Parents: try this at home!)

Adults, as a rule, also like to hear the same stories, although they prefer that the stories have some differences – the human brain loves to detect differences. The popularity of familiar stories that reinforce the status quo is not limited to television and popular literature: historians repeat themselves.

Horatio-Alger stories thus become the narrative for male public figures who rise to success from poverty; for women, the story is more problematic, because female public figures are anomalous. In either case, the politics of the narrator inform the story being told. In narratives about women, as Joanna Russ has pointed out in her classic How to Suppress Women’s Writing, the narrator may simply deny that the woman actually accomplished anything worth noting. —from Eileen Gunn's introduction* to Narrative Power 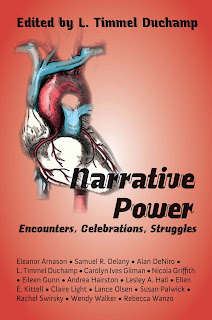 It is commonly said that history is written by the victors: the narrator chooses the events that will be part of the story, and the narrative explains their meaning. In fiction, narrative conventions and clichés make writing and reading familiar stories easier, but also impede writers’ efforts to tell unfamiliar stories. This volume asks: Is narrative inherently dangerous? Empowering? Or even liberating? A mix of established and new writers join several scholars in considering the politics of narrative manifested in fiction, history, and science.
________________________
*Eileen's full introduction has been reprinted in the Winter 2010 Aqueduct Gazette, available here.


Table of Contents
1. Going to Narrative: Introduction by Eileen Gunn

Part I. Narrative and History

13. Samuel R. Delany, “The Life of/and Writing”
14. Nicola Griffith, “Living Fiction and Storybook Lives”
15. Eleanor Arnason, “Narrative and Class”
16. Rachel Swirksy, “Why We Tell the Story”
17. Claire Light, “Girl in Landscape: How to Fall into a Politically Useless Narrative Rut and Notions of How to Get Back Out”

Take it from me, there are some really fascinating essays by some really smart people in this book. If you're at all interested in how stories work, this book is for you. And guess what? Following our usual practice, you can purchase copies of Narrative Power for the special pre-release price of $16 until April 1 (through Aqueduct's website only).
Posted by Timmi Duchamp at 12:23 PM

Hey, Timmi, I hope you feel better soon. I hope you write to Antonio, the Lambda Literaryeditor (agonzales at lambdaliterary dot org), to see if he'll review the book. (We're getting massive traffic. It would be so cool to see this book get some attention.)

I want this book!

I've been thinking again a great deal about this sort of situation as in your TOC #6:

Lesley A. Hall, “Beyond Madame Curie? The Invisibility of Women’s Narratives in Science”

I'm reading Richard Holmes's The Age of Wonder: How the Romantic Generation Discovered the Beauty and Terror of Science. Among the figures given a great deal of text in what the author himself declares a 'narrative' history, is Caroline Herschel, the 'comet sweeper,' sister of one of the founders o modern astronomy, William Herschel.

Caroline's early story, in the bosom of a denying, cold family, who, with the exception this brother, evidently chose her to be the in-house slave and scrub, tends to make one's heart sore. Particularly when considering how many Caroline Herschels there had to have been, who didn't have the eventual comfort and rescue by a loving brother.

As Nicola says, this book deserves loads of attention. Wow.

(I wouldn't say it was a "contentious" panel, myself--just that it had a contentions moment or two. But whoa, what a great outcome!)