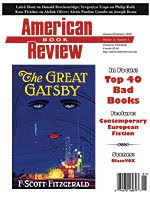 The Focus section of the new issue of the American Book Review, on "Bad Books," features short contributions from forty writers and critics. It's well worth checking out.

R.M. Berry 's reflections particularly struck me as apt. I especially liked is zeroing in on how an encounter with and discussion of a bad book makes one feel:

What makes a book bad? It gives me small joy to hear the judgment pronounced, even by me, since the effect is always stifling, regardless [of] intent.

Just so. And I'm with him, too, when he expands on this to remark:

[A]fter piling on, I always need a bath. E.M. Forster pronounced Gertrude Stein bad, and it would be pleasing to retort that the joke's on him, but who is reckless enough to explain why? In truth, no book has ever made a difference to me that someone whose judgment I respected didn't find execrable.

There are surprisingly few comments on genre fiction in the forty pieces. But here's Berry's comment on that:

Genre books aren't bad. They are the paradigm of good books. If any writing can be justified, romances and Westerns and mysteries and pornography can, being like the stain on a napkin, exactly the size of themselves.

It has always seemed strange to me that bad books aren't a prominent part of our school and college literature curriculum. How do we expect students to learn to tell the difference between good and bad books unless we assign some bad ones for comparison? Don't you need badness in order to know goodness?

I can only conclude that those who have determined the literature curriculum have been more interested in protecting the good or great books from contamination-- that is, in feeling virtuous about their own tastes-- than they are in helping students understand what they read. There is also the view, though, that reading good books is itself sufficient-- no reason to read bad ones for comparison, especially since some students might think some of the bad ones are good and vice-versa, or might catch on to the fact that which books are good or bad is often alarmingly debatable.

As if in response, Sophia A. McLennen describes what sounds suspiciously like a bonding experience with her students over bad books:

I do this for a few reasons....[T]hey assume that I like it or I wouldn't put it on the syllabus. When they f[i]nd out I hate it too, we ha[ve] a great time in class trashing it critically and learning a lot in the process.

One of my favorite pieces in the section is Carol Guess's. She begins by talking about the brilliance of Heather Lewis's second novel, Notice:

Underrated, rarely discussed, the book belongs with contemporary classics. It is perhaps the most disturbing book I've ever read, and amongthe most compelling. It illuminates the state of female, specifically lesbian, subjectivity under contemporary American regimes by deconstructing genres that have failed to capture women's experiences: pulp, noir, mystery, romance. It subverts these genres, yet never falls prey to the directives of political correctness.

Notice was published posthumously. Its narrative voice was so unique that no press would touch it until Lewis committed suicide at forty. Her suicide allowed the book's publication: now that she was dead, and sufficiently chastened for examining experiences that mainstream culture attempts to suppress.

The bad book Guess singles out was also written by Lewis-- and published.

The Second Suspect is the work of an author who understood that her masterpiece had been censored, tossed aside, misunderstood. So she sat down and rewrote it. She made it bad, deliberately bad. And the public loved it.

Among the many books singled out as bad are Cormac McCarthy's All the Pretty Horses, F. Scott Fitzgerald's The Great Gatsby, D.H. Lawrence's Women in Love, and Malleus Maleficarum. Actually, it's reassuring for me to see that consensus is lacking not only on the naming of "good" books, but also on the naming of "bad" ones. It goes without saying, I suppose, that my own list of "bad" books is likely not shared by many others. But I'm not going to go there myself. As Berry says, "After piling on, I always need a bath."
Posted by Timmi Duchamp at 3:44 PM

Email ThisBlogThis!Share to TwitterShare to FacebookShare to Pinterest
Labels: reading

Good grief, it's obvious isn't it? Subjectivity at work.

What's good for me is bad for you and vice versa.

I'm weary with the polarisation of writing and the way we want to reduce everything into simple compartments, like good or bad.

Why don't we simply say, this one works for me and this one doesn't? Then we, the critics, might get judged in turn for our taste along with the authors.

Thanks for this wonderful introduction to the business of literary goods and bads.

The link in this post is broken. It ought to point to http://americanbookreview.org/PDF/Top40BadBooks.pdf instead.

Thanks for pointing that out, Janice. It should work now.

Well, thank you for pointing it out! I was quite entertained by all the different thoughts on the topic. My favorite was probably Michael Berubé's comment on Women in Love. I had to read that novel in college, and his pithy description of it pretty much covers my feelings.