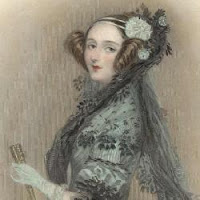 She is mainly known for having written a description of Charles Babbage's early mechanical general-purpose computer, the analytical engine. She is today appreciated as the "first programmer" since she was writing programs—that is, manipulating symbols according to rules—for a machine that Babbage had not yet built. She also foresaw the capability of computers to go beyond mere calculating or number-crunching while others, including Babbage himself, focused only on these capabilities.

To honor her, Ada Lovelace Day has been designated

an international day of blogging to draw attention to women excelling in technology. Women's contributions often go unacknowledged, their innovations seldom mentioned, their faces rarely recognized. We want you to tell the world about these unsung heroines. Whatever she does, whether she is a sysadmin or a tech entrepreneur, a programmer or a designer, developing software or hardware, a tech journalist or a tech consultant, we want to celebrate her achievements.

I realize the focus is technology rather than science, so forgive me, all, if I'm interpreting the call too broadly. But you see, I've always thought of Ada Lovelace as
among the crowd of women who devoted their creative intellects to science and mathematics at a time when disciplinary lines were not so sharply drawn. This year, I'd especially like to sing the praises of oceanographer and astrobioloist Jody Deming,

whose public lecture at the University of Washington last fall not only stimulated my intellect, but invoked a thrilling sense of wonder. You can get some idea of her accomplishments here.