Or should that just be, "A Well-Kept Secret at the Top"?

Everyone, I presume, assumes that politicians (also sometimes known as "world leaders") tell one another things they would never willingly reveal to the people who voted them into office. Usually, though, such discrepancies don't come to light. But in Thatcher Told Gorbachev Britain Did Not Want German Reunification in the Times Online (U.K.), Michael Binyon tells a tale that is bound to warm historians' hearts, of

a remarkable cache of official Kremlin records smuggled out of Moscow. After Mr Gorbachev left office in 1991, copies of the state archives went to his personal foundation in Moscow. A few years ago Pavel Stroilov, a young writer doing research at the foundation, understood the huge historical significance of what they recorded.

He copied more than 1,000 transcripts of all the Politburo discussions and brought them with him when he moved to London to continue his research. His copies were made just in time, as all the transcripts of Politburo meetings and talks with foreign leaders have now been sealed. The records detail how the Russians reacted to the tumultuous events of 1989 and reveal the frantic attempts by Britain and France to halt moves to German unification by manoeuvring the Soviet Union into opposing it. 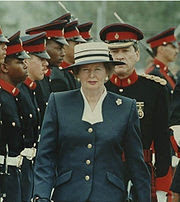 that she was “deeply impressed” by the courage and patriotism of General Wojciech Jaruzelski, the Polish Communist leader. She noted, approvingly, that Mr Gorbachev had reacted “calmly” to the results of the Polish elections, in which the Communists were defeated for the first time in an open vote in Eastern Europe, and to the other changes in Eastern Europe.

Margaret Thatcher as a Jaruzelski fangirl? Sounds like a Saturday Night Live skit, or something out of a comic book! But

then she launched her bombshell. She asked that her next remarks should not be recorded. Mr Gorbachev agreed — but the Kremlin transcript included them anyway, noting laconically: “The following part of the conversation is reproduced from memory.” She spoke of her deep “concern” at what was going on in East Germany. She said “big changes” could be afoot.

And this led to her fear that it would all eventually lead to German reunification — an official goal of Western policy for more than a generation.

She assured Mr Gorbachev that President Bush also wanted to do nothing that would be seen by the Russians as a threat to their security. The same assurance was later spelt out in person to Mr Gorbachev at the Soviet- American summit off Malta. 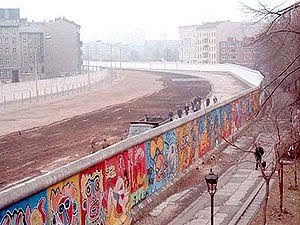 Six days before the wall came down, Gorbachev discussed the unrest in East Germany with Vladmir Kryuchkov and Eduard Shvardnadze:

Kryuchkov: It will be difficult for them* if we take it down.

Gorbachev: They [East Germany] will be bought up whole . . . And when they reach world prices, living standards will fall immediately. The West doesn’t want German reunification but wants to use us to prevent it, to cause a clash between us and the FRG so as to rule out the possibility of a future “conspiracy” between the USSR and Germany.

Mrs Thatcher was not the only one worried by events in Germany. A month after the Berlin Wall came down, Jacques Attali, the personal adviser to President Mitterrand, met Vadim Zagladin, a senior Gorbachev aide, in Kiev.

Mr Attali said that Moscow’s refusal to intervene in East Germany had “puzzled the French leadership” and questioned whether “the USSR has made peace with the prospect of a united Germany and will not take any steps to prevent it. This has caused a fear approaching panic.”

He then stated bluntly, echoing Mrs Thatcher: “France by no means wants German reunification, although it realises that in the end it is inevitable.”

In April 1990, five months after the wall came down, Mr Attali said that the spectre of reunification was causing nightmares among France’s politicians. The documents quote him telling Mr Mitterrand that he would “fly off to live on Mars” if this happened.

Lamenting the wall and the separation of East and West Germany was a frequently invoked mantra from 1961, when the wall went up, to late 1989, when the wall came down. By the time I was an adult, I'd come to hear the lament as crocodile tears, just more of the constant stream of Cold War rhetoric that permeated life in the US. After the wall came down, quite a few analysts expressed anxiety about the possible consequences, of course. But never, of course, the people at the top: they were always jubilant. But now we know...
_______________________
*"Them" = the East German government