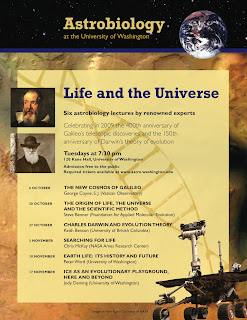 Yesterday I received a mailing advertising a fall lecture series sponsored by the University of Washington's Astrobiology program, commemorating the 400th anniversary of Galileo's telecscopic discoveries and the 150th anniverary of Darwin's theory of evolution. Have to say, this is really cool stuff. Any sf writer'd be a fool not to attend! Here's the description and schedule:

Life and the Universe
Our series celebrates Galileo and Darwin and their ideas and takes stock of how these ideas have led to the emerging interdisciplinary science of astrobiology, which asks fundamental questions about the phenomenon of life in a cosmic context. Research today into the origin and evolution of life and the possibilities of extraterrestrial life has been made possible by these giants of science.

The New Cosmos of Galileo

Advances in high-contrast imaging have produced a new sample of spatially resolved debris disks with morphologies attributed to the dynamical effects of planets. I will briefly review several cases, including our recent non-detection of the planet candidate Beta Pictoris b using Keck adaptive optics at L-prime. Then I will focus on the case for a planetary system around the nearby A star Fomalhaut. Optical coronagraphic observations using the Advanced Camera for Surveys aboard HST shows a vast dusty debris belt offset from the star and cleanly sculpted at its inside border. Follow-up HST images have further revealed a co-moving point source with apparent orbital motion 18 AU interior to the dust belt. I will discuss both the observational and theoretical evidence that the point source is a planet with < 3 Jupiter masses, making Fomalhaut b the lowest mass planet candidate detected via direct imaging. I will give alternate explanations and discuss future plans for the detailed mapping of Fomalhaut's planetary system.

The Origin of Life, the Universe and the Scientific Method

Everyone thinks that "the scientific method" based on observation, hypothesis, and experiment offers a reliable path to truth about the natural world. But how do we apply such methods to the big questions, like:

"How did life originate?"
"Are we alone in the cosmos?"
"What is this 'life stuff' anyway?"

The talk will consider how scientists go after such big questions starting from our worm's eye view of the cosmos. We will see scientists discarding data when it leads in undesirable directions, changing definitions as convenient, and ignoring disproofs. Nevertheless we will end up seeing how progress is made to address some of the oldest questions that humankind has asked.


Tuesday, October 27, 2009
Keith Benson
Leading historian of biology, who studies the era when Darwin's seminal work was being debated.

Charles Darwin's epochal book, On the Origin of Species, was and is recognized as one of the most important scientific texts ever written. Darwin struggled for over 20 years to produce what has come to be considered the foundation stone for modern evolution theory. Yet, after the book's publication in 1859, its main argument for species transmutation, as it was then called, represented but one of a number of ideas of organic change over time. Indeed, Darwin's ideas ran into so many obstacles that he was forced to offer several corrections and explanatory revisions in later editions of the book. It was not until the early twentieth century that a viable 'Darwinian' version of evolution theory began to emerge and perhaps not until mid-century that Darwin's version of evolution theory, now reconceptualized both with natural history observations and genetic explanations, was g enerally accepted. In this talk, I will explain Darwin's original development of his ideas, detail the major obstacles he confronted from 1859 until his death in 1882, and sketch the general outline of the gradual formation of Darwinian evolution theory in the twentieth century.


Tuesday, November 3, 2009
Chris McKay
Top NASA astrobiologist who studies extreme life in Antarctica and the Atacama Desert of Chile, and searches for life on Mars.

One of the main goals of astrobiology is the search for another type of life in our solar system. The planet Mars, Jupiter's moon Europa, and Saturn's moon Enceladus are the most likely targets for this search. Studies of the limits of life and life in extreme environment on Earth help us develop a search strategy for life on other worlds. Fossils are not enough, for we will want also to determine if life elsewhere is the product of a separate genesis from life on Earth. For this determination we need to access intact alien life, possibly frozen in the deep old permafrost of Mars or the icy surfaces of Europa and Enceladus.


Tuesday, November 10, 2009
Peter D. Ward
UW paleontologist and astrobiologist who studies the history of our planet's life, as well as our long-term future.

Earth Life: Its History and Future

Earth life is still the only known life. Studying its history and future gives us clues as to what an extraterrestrial life might be. While Earth life is incredibly variable in terms of species, ranging from tiny microbes to giant redwood trees, in fact the basic units of DNA and amino acids are so similar that the unity of life is perhaps even more striking than its diversity. In this talk I will speculate on how that happened: Was our life the first out of the evolutionary gate (and therefore quickly dominated the world), or was it the product of brutal competitive wars in which today's familiar life arose through competition rather than speed? I will also look forward in time, to see that the evolution of life will be followed by its devolution in an approximately symmetrical manner.

Ice as an Evolutonary Playground, Here and Beyond

Most of the planetary (and moon) surfaces we can expect to explore and sample in this century are deeply frozen. Where life-supporting water exists, it is in the form of ice or as briny (or more exotic) fluids kept liquid to the extent that salts depress the freezing point of water. Exploring Earth's coldest saline ice formations enables us to understand these habitats not simply as extreme settings that preserve life until conditions become more favorable, but as evolutionary playgrounds where microscopic life forms can engage in surprising activities that promote their well-being and the adaptability of their offspring. What we are learning from Earth's ice, even as we are losing it to a warming climate, brings optimism to what we may find elsewhere in the solar system.


If you live in the Seattle area and would like to attend any (or all!) of these lectures, they're at 7:30 p.m. in 120 Kane Hall. Admission is free, but you need to reserve tickets (which you can do through the website I linked to above).
Posted by Timmi Duchamp at 3:40 PM

Email ThisBlogThis!Share to TwitterShare to FacebookShare to Pinterest
Labels: astrobiology