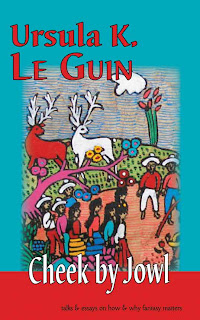 Aqueduct Press is pleased to announce the release of Cheek by Jowl, a collection of talks and essays on how and why fantasy matters, by Ursula K. Le Guin. In these essays, Le Guin argues passionately that the homogenization of our world makes the work of fantasy essential for helping us break through what she calls "the reality trap." Le Guin writes not only of the pleasures of her own childhood reading, but also about what fantasy means for all of us living in the global twenty-first century.

The monstrous homogenization of our world has now almost destroyed the map, any map, by making every place on it exactly like every other place, and leaving no blanks….As in the Mandelbrot fractal set, the enormously large and the infinitesimally small are exactly the same, and the same leads always to the same again; there is no other; there is no escape, because there is nowhere else.

In reinventing the world of intense, unreproducible, local knowledge, seemingly by a denial or evasion of current reality, fantasists are perhaps trying to assert and explore a larger reality than we now allow ourselves. They are trying to restore the sense - to regain the knowledge - that there is somewhere else, anywhere else, where other people may live another kind of life.

The literature of imagination, even when tragic, is reassuring, not necessarily in the sense of offering nostalgic comfort, but because it offers a world large enough to contain alternatives and therefore offers hope.

— from Cheek by Jowl

"I had many a-ha moments as I was reading the various essays-places where Le Guin articulated something I understood, or believed, but hadn't put into words… [Le Guin] is smart and erudite and never talks down to the reader, but never makes her arguments too hard to follow, either. She's good with facts, but she allows emotional content, something you don't always get in the same package. I highly recommend this book." — Charles de Lint, Magazine of Fantasy and Sciente Fiction June/July 2009

"Ursula K. Le Guin may be on the short list of great writers to emerge from our little corner of the map, but she's also something of a skirmisher… and she continues to ask the questions here, mostly in the context of children's and YA literature, with the unflagging passion and clarity we've come to expect from her critical writing."

— Gary K. Wolfe, Locus April 2009 Since Aqueduct has taken delivery of several boxes of Cheek by Jowl and the official release date is April 30, we'll be selling the book at a $4 discount until May 1 through our site. You can order your copy here.
Posted by Timmi Duchamp at 4:29 PM

Will there be a discount at WisCon, as well?

Although we intend to have some 5th-Anniversary specials at WisCon, I'm not sure whether we'll have a specific discount on Cheek by Jowl. It'll depend on whether any other booksellers carry the book in WisCon's Dealers Room. If they don't, we probably will give a discount; if they do, we won't, in order not to make use of an unfair advantage over the booksellers (with whom we'd like to keep a good working relationship). This is also the reason, of course, we'll be dropping the discount from our website after the official date of release.