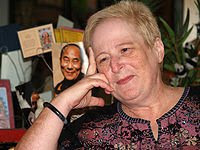 The great theorist Eve Kosofsky Sedgwick died last night; she had been battling breast cancer since 1991. Looking back over the course of recent feminist history, you might say she took Gayle Rubin's 1970s call from distinguishing between sex and gender and ran with it-- brilliantly.

I read her first book, Between Men: English Literature and Male Homosocial Desire, in 1985, when it was first published. I have a distinct memory of picking it up in the UCSD bookstore, where I found it, while browsing the Women's Studies shelves, and thinking this was a book I had to read. The next year, in 1986, I bought her dissertation book, The Coherence of Gothic Conventions. For me, her most important book, though, was Epistemology of the Closet, while Tendencies was the most enjoyable. Her work is often very challenging reading. But it is usually worth it, for the way it consistently nudges (or even shoves) one into new ways of thinking: which is surely the supreme achievement for works of theory.

The Epistemology of the Closet was the breakthrough text of queer theory and has instituted lasting effects on literary reading and queer practices within and outside the academy. Sedgwick allowed us to think about the tensions that exist between "identities" and "acts" and also encouraged us to consider the powerful effects of silence even as we affirm public acts of coming out. She gave us a way of understanding desire as it crosses identifications and bodies, and allowed us to see a way of reading some of the most important modernist literary texts that brings to the fore the intense preoccupation with queerness that runs through its languages. She also offered a way to think about the vibrant connections between academic and activist work. Sedgwick made important contributions to gender theory and must certainly be counted as one of the founding intellects of queer theory. I'm deeply saddened by her loss.
Posted by Timmi Duchamp at 12:34 PM

What a shame. I still adore her categorization of FRANKENSTEIN as 'homosexual Gothic', a nail-on-head description which also applies to James Hogg's JUSTIFIED SINNER, and Stevenson's DR JEKYLL. RIP.