The Pleasures of Reading, Viewing, and Listening in 2021, pt. 28: Arrate Hidalgo 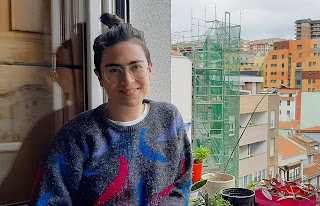 My Mother's Year in Books
by Arrate Hidalgo

This is not my year in books, but my mother’s. And it covers not only 2021, but also 2020. Why? Because these past two years have seen a radical change in my mother’s reading habits. And if there wasn’t already enough to blame on the pandemic, this is too.

Ever since I became absorbed by fantasy and science fiction in my early teens (the former came some years before the latter), and especially as I turned twenty and discovered feminist genre fiction, my mother has regularly asked me if I would ever read anything “real” again. Anything “without aliens and robots in it.” Down-to-earth fiction. I suspect that she thought, as Ursula K. Le Guin pointed out years before, that fantasy was useless, that it would teach me nothing worth keeping in my head if I was ever to get a job. It so happens that it has allowed me to find work in my own way, but that’s another story. Back then, as now, I read sff because I love it.

She didn’t. Or she thought she didn’t. Fast forward to 2020, my parents and I, fortunately healthy, confined together in the first wave of Covid that hit Spain. My mother is running out of stuff to read. My childhood room is full of it, since this is where most of my books live (as I’m moving places all the time due to the current housing market). She comes in casually, wondering what I’m up to. And she starts pointing at books and asking me about them. They’re science fiction books.

I guess, come to think of it, she had read some sff before, but since it was translated by me she probably thought it didn’t count. Ha! It does. “New mother” by Eugene Fischer and “The Tomato Thief” by Ursula Vernon, both published in my translation in book format by Spanish press Cerbero, are two excellent ways to be lured into the genre.

The first sff book I can remember giving her was Octavia Butler’s Kindred. I thought it would be a safe bet. When I picked it up I did not put it down until I finished it. And time travel in this novel was an excuse for Butler to tell a story that otherwise did away with science fictional tropes. I was right. She also was glued to it and gave it back the day after.

I normally give my mother books to read by piles, though. She goes through them at a speed I definitely did not inherit. Anyway, next came the first sff pile I gave her: anthologies of Spanish genre authors, thinking she would appreciate the variety and short format. One was Distópicas y poshumanas, a two-volume anthology of science fiction written by Spanish women covering from the 19th century to the present day. Edited by experts Teresa López Pellisa and Lola Robles (herself an Aqueductian), and published twice in two years by different presses, it features authors known to the mainstream as classics beyond speculative writing, such as Emilia Pardo Bazán and Ángeles Vicente, who wrote Zezé, the first novel written in Spanish featuring a lesbian protagonist. The rest of the pile were volumes of the Alucinadas series, which was created in 2014 by Cristina Macía and Cristina Jurado and collects contemporary science fiction by Spanish and Latin American women. Five volumes exist to date, and especially the first two marked a milestone in the visibility of women genre authors writing in Spanish. It certainly opened up an entire world to me back when the first volume was published. A lot has changed for the better in the eight years (already!) that have passed since, and it is to be celebrated that such anthologies are no longer as necessary as before.

Next came the pile of novels written by authors that were featured in those anthologies and were therefore known to her: Uno by Nieves Delgado, La moderna Atenea by Conchi Regueiro, El informe Monteverde by Lola Robles (trans. by Lawrence Schimel as Monteverde: Memoirs of an Interstellar Linguist for Aqueduct), and Consecuencias naturales by Elia Barceló, all of which are science fiction. Uno explores Delgado’s always favored subject of artificial intelligence, intersected by gender identity; La moderna Atenea is a partially epistolary novel, representative of Regueiro’s seamless blending of costumbrist and speculative fiction; Monteverde echoes Le Guin’s anthropological vein in a linguistic science fiction story that challenges preconceptions on disability; and Consecuencias naturales is a sharp critique and total inversion of the male hero as conqueror of space.

My mother loved them all. At this point she was already coming to terms with the fact that aliens and robots were compatible with good literature. Since then she has read more Butler, Ken Liu’s selection and translation of Chinese sf titled Planetas invisibles, Akwaeke Emezi’s Freshwater, and Le Guin’s “The Wild Girls.” But the rest of my Le Guin books are in English, so I’m planning to get her a bunch more, as well as Joanna Russ’s The Female Man. Its Spanish translation, after spending many years out of print, has been recently published again– a direct result of the work done by feminist fandom collectives such as the website La nave invisible.

Speaking of out-of-print, the last book I’ve given her was Connie Willis’s Doomsday Book. “Quite timely,” she commented. And how not to agree. In this Christmas-time time-travel story set in a future pandemic-ridden world, Dunworthy, the Oxford historian worried about the pupil they have sent to the Middle Ages in the middle of a new virus outbreak, comes across a flyer:

“In boldface type it said: ‘FIGHT INFLUENZA, VOTE TO SECEDE FROM THE EC.’ Underneath was a paragraph: ‘Why will you be separated from your loved ones this Christmas? Why are you forced to stay in Oxford? Why are you in danger of getting ill and dying? Because the EC allows infected foreigners to enter England, and England doesn’t have a thing to say about it. An Indian immigrant carrying a deadly virus–’ Dunworthy didn’t read the rest. He turned it over. It read, ‘A Vote for Secession is a Vote for Health. Committee for an Independent Great Britain.”

I remember perfectly well pro-Brexit party UKIP’s lies about the NHS being under pressure by refugees taking all the healthcare away from the British. The one thing Willis didn’t get right was how soon the “secession” would actually happen.

At this point I’ve stopped worrying about what to give my mother to read, whether it will be too much, too imaginative. “They’re just so imaginative” is the one thing she always says after every read. Apparently that isn’t a problem anymore.

Among other things,  Arrate Hidalgo is Associate Editor at Aqueduct Press. She is also an English to Spanish translator, an founder and organizer of a feminist sf con, and an amateur singer. Visit her website at arratehidalgo.com. Her translation of the Basque science fiction classic, Memories of Tomorrow, by Mayi Pelot, is forthcoming from Aqueduct Press in spring 2022 as a volume in Aqueduct's Heirloom Book series.

Posted by Timmi Duchamp at 1:57 PM