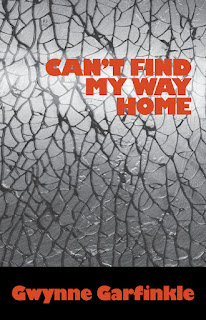 I'm pleased to announce the release of Can't Find My Way Home, the debut novel by Gwynne Garfinkle, in both print and e-book editions. It's available now from www.aqueductpress.com and other venues.

Young actress Joanna Bergman has been guilt-ridden for four years. Her best friend Cynthia Foster died in a firebombing meant to protest a New York draft board near their college in 1971. Jo was supposed to accompany the charismatic Cyn on the night of the bombing but backed out at the last minute. Jo’s new life is complicated enough: she’s falling for her soap opera costar, the philandering Martin Yates, and trying to regain the sense of connection she lost when Cyn died. But then Cyn’s ghost appears, furious with Jo for bailing on her that fateful night and, worse, for going on living without her. As Jo tries to figure out what her friend’s ghost wants from her, she is hurled again and again back to the night of Cyn’s death.

"Garfinkle catches exactly the passionate and reckless moods of the anti-Vietnam War movement among young people in those years, the deadly naiveté, delight in rebellion, and idealistic misunderstanding of where events just had to go from there…. Writing a really good ghost story is a lot harder than it looks. But Garfinkle pulls it off with élan and produces a wonderful story about lives unlived, for one reason or another, shifting perspectives, what (if anything) we owe our dead, and how we reflect each other, hold each other back, and provide the take-off for others’ sprints into maturity."
—Suzy McKee Charnas, author of The Vampire Tapestry and The Holdfast Chronicles

"All of us have questions and regrets about things we’ve done, but Jo Bergman is literally haunted by her past. This remarkable novel kept me on tenterhooks as I watched Jo seesaw among the different lives she would have experienced had she made different decisions. Gwynne Garfinkle has nailed both the fraught nature of the 1960s and early 70s and the difficult path of a woman struggling to be her whole self despite the ghosts of her past and the challenges of her present."  — Nancy Jane Moore, author of For the Good of the Realm and The Weave

"Here is a book that took me back in the same way a ghost of her past takes Joanna back, again and again. Gwynne Garfinkle’s ghost story realistically recreates a traumatic moment in America’s past. I was more than impressed with the realism of a period that I personally lived through. Garfinkle asks the reader what would happen if you could go to a pivotal moment in your past and relive it, searching for a different outcome? Would you, could you? In the end would it make it any better? Garfinkle’s deft prose takes you on this journey with suspense and gentleness, tackling both regret and hope with equal sincerity. This book lives not only in the softer side of the horror genre, but as a work that instructs us to confront our own choices and how they irrevocably impact others. If you want a thoughtful and intriguing journey, buy this book."  —Beth Plutchak, author of Liminal Spaces

"Garfinkle (People Change) delivers a fascinating, disorienting ghost story set in the 1970s. Actor Joanna Bergman has carried shame and remorse over her friend Cynthia Foster’s death since it happened four years ago. As protestors against the Vietnam War, the duo would have done anything to stop the bloodshed—but when Cynthia and Joanna plotted to blow up a New York City draft board, Joanna backed out at the last minute. Her hesitance spared her life, and Cynthia died in the explosion. Now, the war is over, and Joanna has her first stable acting gig on the daytime soap Hope Springs Eternal and is developing feelings for her costar, Martin Yates. She’s guiltily moving on with her life, until Cynthia’s angry ghost appears to her and forces Joanna to relive that fateful night, turning over alternate choices she could have made and how things might have gone differently. The tale moves swiftly between reality and the paranormal, successfully making the reader question if Cynthia’s ghost is just a projection of Jo’s psyche or something more concrete. Fans of counterculture narratives and ghost stories will want to take a look."   —Publishers Weekly, 09/13/2021

"I am a total sucker for explorations of mid-twentieth century women’s work lives and choices, and I don’t mind a bit if the speculative element of something takes awhile to unfold, so I was absolutely the target audience for this book. Jo’s soap opera work was not something I’d really thought about before, but Garfinkle clearly did her research into the details of that field and treats it with respect but not reverence–just the right balance. Jo’s reconsideration of what was needed, what was useful, what was right, in regards to her past activism is well-situated in the ’70s–she is close enough to our own attitudes to be engaging but not unduly contemporary, and some of the questions she grapples with are still of interest today. This one is frankly feminist and takes its time with some very worthwhile questions, and it allows its humans to be human rather than insisting on Good Guys and Bad Guys. I’m so glad I got this copy."--Marissa Lingen, Novel Gazing Redux  (read the whole review here)