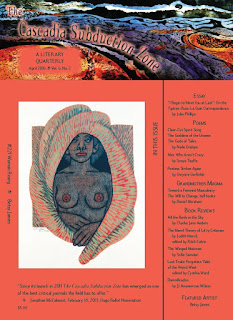 The April issue of The Cascadia Subduction Zone is out! The issue opens with Julie Phillips' keynote talk at the Tiptree Symposium (held last December at the University of Oregon) discussing the correspondence between Ursula K. Le Guin and James Tiptree Jr and Joanna Russ and James Tiptree Jr. The issue also includes poetry by Gwynne Garfinkle, Neile Graham, and Sonya Taaffe, a Grandmother Magma column by Daniel Abraham, and reviews of five new books; the issue's featured artist is Betsy James (who is also the author of Roadsouls, a novel Aqueduct has just published, and stories recently published in The Magazine of Fantasy and Science Fiction). If you're not already a subscriber, you can subscribe or purchase the issue here.

Essay
“I Begin to Meet You at Last”:
On the Tiptree-Russ-Le Guin Correspondence
by Julie Phillips
Poems
Clear-Cut Spirit Song
The Goddess of the Unseen
The Gods of Tales
by Neile Graham

Grandmother Magma
Toward a Feminist Masculinity
The Will to Change, bell hooks
by Daniel Abraham

Reviews
All the Birds in the Sky, by Charlie Jane Anders
reviewed by S. Qiouyi Lu

Posted by Timmi Duchamp at 1:17 PM