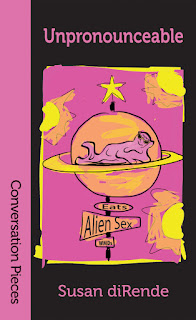 I'm pleased to announce a new volume in Aqueduct's Conversation Pieces series: Unpronounceable, a novella by Susan diRende. We're releasing it in both e-book and print editions. (You can purchase these at www.aqueductpress.com now.) Though feminist comedy is a definite thing, it's not all that visible (or should I say audible? since it tends, actually, to be voice-driven) in the sf/f field. Works by Leslie What, Esther Friesner, and Eileen Gunn come easily to mind, of course. And a lot of humor bubbles through many other writers' work, including some of the work we've published by Eleanor Arnason. And there's certainly a lot of sharp feminist wit to be found (beginning, number one, with Joanna Russ, of course.) Unpronounceable is what I'd call broad comedy. Its author, Susan diRende, is so into this kind of comedy that she founded the Broad Humor Film Festival, Los Angeles, to support women’s comedic vision on film. You can probably tell that from the description of this novella:


Earth has discovered it is not alone in the universe. The aliens — pink, shapeless, and peaceful — are very nice, but after a string of failed diplomatic missions, they ask Earth to stop with the crazies and send someone normal. In frustration, the UN devises a lottery to pick the next ambassador. Enter Rose Delancy, a Jersey waitress.

Rose settles in and starts teaching the natives all about humans with the help of Hollywood movies, junk food, and sex. They show her a few things of their own involving the transformation of matter, but Rose is only interested in how it applies to sex. That is until she learns that she’s been suckered to play the patsy for an interstellar takeover by Earth. To avoid the horrors of planetary annihilation, not to mention having to go back to Jersey, Rose and the Blobs have to stop the invasion and save the planet.

Susan will be reading from Unpronounceable at three venues in the Seattle area-- during the Broad Humor Festival at Olympic College in Bremerton, Wednesday, April 13, 10:30 am, at the Olympic College Bookstore, BSC, 1600 Chester Avenue; Friday, April 15, 1 pm, at the Bremerton Public Library, 612 Fifth Street; and in Seattle, Tuesday, April 19, 7 pm, at Third Place Books, Ravenna, 6504 20th Ave NE.

Susan has also started a blog by Rose Delancy, the narrator of Unpronoucenable, which can be found at http://ambassadorrose.blogspot.com/.
Posted by Timmi Duchamp at 5:13 PM