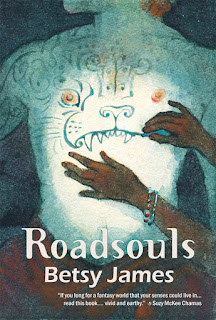 I'm pleased to announce Aqueduct Press's release, in both print and e-book editions, of Roadsouls, a novel by Betsy James. Roadsouls explores the power of art and creativity for transforming not only one’s own life but also the world one lives in. Timid Duuni has spent her life as abused and guarded property. Blind, arrogant Raím is determined to be again what he once was: hunter, lover, young lord of the earth. Desperate to escape their lives, the two lift up their hands to the passing Roadsoul caravan, and are—literally—flung together naked. Each of them soon learns that saying “yes” to the Roadsouls is more than just accepting an invitation to a new life—it’s a commitment that can’t be reversed. For Duuni and Raím, nothing is as it was. Lost to their old lives, hating each other, they are swept out of their cruel old certainties into an unknown, unknowable, ever-changing world of journey and carnival, artists and wrestlers and thieves. Behind them, inexorable, pads a lion. Inexorable, too, is Duuni and Raím’s inevitable encounter with it, an encounter that will change everything.

“If you long for a fantasy world that your senses could live in, and that isn’t full of scheming nobility, cynical warriors, mass hatreds, and magic as a weapon, read this book. Its backbone is the wandering life of a sort of gypsy-hippie-circus group traveling a pre-industrial landscape and offering a way out to the misfits and throw-aways of the local villages. Raím, a young man blinded in a fall, and Duuni, the unhappily rebellious daughter of religious patriarchy, find their ways outward from home and towards their own strengths, and each other, with (and sometimes dangerously strayed far from) the Roadsouls' caravan….”
“The writing is vivid and earthy, celebrating a rural world with its sights and smells and wildlife, and the customs and pithy, colorful speech of its people.…”   —Suzy McKee Charnas, author of The Vampire Tapestry and Dorothea Dreams

“Betsy James’ dual creative lives as artist and writer enable her to create an elegant variation on the classic hero’s journey. The roads upon which Duuni and Raím travel are those of dirt and rocks, of various cultures lovingly detailed, and of the complex interior landscape of the self. The Roadsouls who are their guides partake more of the trickster than the wise guardian, but as the journey goes on it becomes clear that only the wild and whimsical will free these tormented beings from the shackles that bind their innermost selves.”
—Jane Lindskold, author of the Firekeeper Saga

In this subtle fantasy, James (Listening at the Gate) follows two wounded young people as they move toward (and sometimes away from) each other.... The blossoming of Duuni’s artistic talents and the gradual process of Raím working through his anger are sensitively depicted, and the book has the rhythms of the road—meetings, partings, and new landscapes every day—at its heart.
—Publishers Weekly, Jan 2016

"An innovative and engaging fantasy about ordinary people in a rather low key fantasy realm. Unhappy with their lives, two people abandon their previous circumstances to join a kind of combination caravan and freelance entertainment troupe on its journey across their world. They have adventures of a sort, but they are generally unmelodramatic and they learn more about themselves than about their companions."--Don D'Ammassa, Critical Mass

The Roadsouls, and the novel as a whole, are...open to wonder: genuine transformations that just happen, without rituals or spells. ... Betsy James deliberately avoids the tropes and narratives typical of long fiction (mainstream, heroic fantasy, or romance).
—Locus, Faren Miller,  April 2016

Roadsouls can be purchased from Aqueduct Press here.
Posted by Timmi Duchamp at 8:32 PM