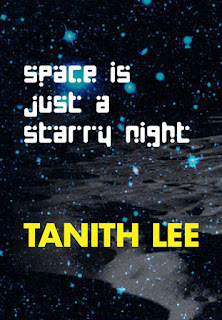 I'm pleased to announce that Aqueduct Press has taken delivery of Tanith Lee's new collection, Space Is Just a Starry Night. The tales in Space Is Just a Starry Night range across genres, as elegant as the field of stars spanning a clear dark sky. A lone survivor of plague receives a mysterious visitor; a prison planet tortures political prisoners by methodically manipulating their memories; a young woman uncovers the ghastly truth about the cryogenically preserved ancestor who’s been thawed; a ship's officer struggles with his suspicions about a shy drab woman taking passage aboard a ship of sun-worshipers—Tanith Lee explores these and other scenarios in her ever intense sensual prose.

Tanith Lee's work has long been noted for its masterful beauty and sensuality. Wierdifctionreview.com's list of 101 Weird writers slotted her in at #10, observing that “Whatever her subject, Lee's vision is intense and feverish; like many of her characters, she seems to navigate the waters of unseen worlds. And it’s difficult to resist the call of that spell; there's something haunting about these visions.”

And here's the first review:

Lee’s powerful science fiction collection assembles 12 tales published between 1979 and 2011, plus two originals. All of them showcase her strong, entertaining, and often gorgeous writing. “The Beautiful Biting Machine” packs an irresistible wallop as it describes a sensuous sideshow at the Nightfair, a sort of giant carnival of dark desires. The werewolf myth takes on a deep space element in “Moon Wolf,” in which Lee's prose is lovely: “The ocean came in, sigh on sigh, quintessential sea, to solace the onyx shore, under the solar light that did not glare any more but was smooth as the taste of cream.” The intriguing “With a Flaming Sword” puts an unusual spin on the story of Adam and Eve (in a manner that might fluster Biblical literalists). “Written in Water” also tackles creation myths, with a far grimmer outcome. This is a solid grouping of stories that deserves a broad audience. —Publishers Weekly July 06, 2013

"Once worlds have ended, and the curtains of space closed upon them, where does their genius go? Their great music and art, their architecture, literature, and thought, their beauty—all held till then in vessels of physical form, or the records of machines, or simply in the memory of humankind. Is everything obliterated merely, rinsed away and lost?"   —from “Within the Ghost”

You can purchase the book now, in trade paperback as well as e-book editions, in advance of the official release date, directly from Aqueduct Press. Eventually, of course, it will be available in all the usual places.
Posted by Timmi Duchamp at 8:56 PM