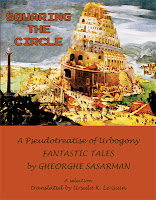 Good things happened last night in the auditorium of Seattle's Public Library. Ursula Le Guin, who came up from Portland, Mariano Martin Rodriguez, who flew to the US from Brussels, author Gheorghe Sasarman's daughter, who flew to the US from Munich, and his nephew who came down from British Columbia, all joined forces with University Bookstore and the Seattle Public Library to launch Sasarman's Squaring the Circle: A Pseudotreatise of Urbogony, into the anglophone world. Misha Stone opened for the Seattle Public Library with a brief introduction, then presented Sasarman's daughter, Anna, who read his letter to the audience in fluent English, detailing a bit of the book's history dating from the mid-1970s (and its vicissitudes under the insanities of the infamous Ceausescu regime) and the importance to him of its finally achieving an English-language publication.

The book's Spanish translator, Marian Martin Rodriguez, spoke next, describing the book's happenstance survival through the diverse sorts of misfortunes that can befall books (and which often end in their eternal obscurity). He himself somehow came upon the French translation of some tales from  Squaring the Circle, and then found the Romanian original edition. Francisco Arellano, a Spanish publisher of speculative literature who had read the French translation of the book, which was nearly lost forever when its publisher went bankrupt shortly after the book was printed, wanted to publish the book in Spanish. When he told Mariano his wish, Mariano proposed to translate Squaring the Circle from the Romanian original. He then tracked down its author and undertook the Spanish translation with the author's blessing. When his Spanish translation was published, Mariano sent the book to Ursula, his favorite English-language author. It was a little like putting a message in a bottle, he said-- a gesture of hope with little certainty that she would actually one day read the book.

Next Ursula took the microphone. Many people send her their books, she said, and so as she usually does, after receiving the book, she paged through it, appreciating the beauty of its design, and sent Mariano a polite note thanking him. In most such cases, the audience was left to infer, that would be the end of the story. But the book persisted in remaining on her desk-- where, Ursula said, very few books ever stay for long. And so before long she picked it up and decided to try one of its tales. Its language appealed to her, and she tried another. Then she decided she wanted to translate what she was reading because, she said, it was only when she makes a translation into English that she feels she really understands the Spanish.

And here's the thing: Ursula loves making translations of work she likes because translating is very much like the part of writing that she loves best: revising and rewriting. The hard part of writing fiction, she said, is getting the first version of the story into words. But revising? "Revising is gravy." At this point I was swooning with pleasure, because that's exactly how I've come to feel about fiction writing, myself (even if I didn't start that way).

And then Ursula told the rest of the story, about translating the first few with the idea of getting them into English-language sf magazines, and then deciding (when that didn't look promising) to translate enough of the book's 36 tales for a book that a publisher like Aqueduct might want to publish. In the end, she translated 24. By this time she was in contact with Mariano, and eventually they together consulted the author on points they couldn't be certain of. And thus was born the English-language edition Aqueduct has published.

The next part of the program also delighted me. Ursula read the collection's second tale, "Arapabad" in her translation (in English), Mariano read it in his translation (in Spanish), and the author's nephew, Vlad, read the original tale (in Romanian). Ursula also read "Vavylon," and she and Mariano read the English and Spanish versions of "Kriegbour" (which Mariano dramatized as he read).

Next came  questions from the audience with answers from Ursula and Mariano, followed by their 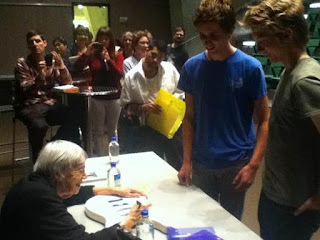 signing books. Which took a long, long time, since many people had books for Ursula to sign. And not only books to sign-- as you can see from Misha's photograph, Ursula also signed a guitar last night.

I believe there will eventually be a podcast of the event available, made by the Seattle Public Library. As soon as I've heard anything about that, I'll let you all know.
Posted by Timmi Duchamp at 4:05 PM