The Universe of Things is now available 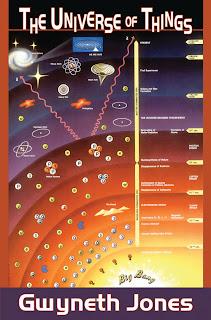 I'm pleased to announce that we've finally received copies of our latest book, The Universe of Things, a collection of Gwyneth Jones's short fiction, from the printer. It is late getting to us, due to a combination of the terrible weather in the eastern US and the holidays, which means we've already passed the official release date. Still, we've decided to discount sales of the book through our website anyway, until January 25. You can purchase it here for $15.

The stories in The Universe of Things span Gwyneth Jones's career, from "The Eastern Succession," first published in 1988, to the just-published "Collision."  Each opens a window into a richly depicted culture in which intelligent, resourceful characters struggle to make sense of the mysteries of their world.

In the introduction by Steven Shaviro, author of Doom Patrols and Connected, or What It Means to Live in the Network Society, Shaviro notes, "As a feminist writer, Jones refuses to accept compromises that leave gender inequities in place—and recognizes how they may well have staved off something worse. And as a science fiction writer, Jones shows deep awareness of how provisional, and fragile, all our acceptances and reconciliations can be, for there are always new potentials, new cultural or technological disruptions in the offing. Jones envisions a future that is different enough from the present that we are forced to recognize the contingency—and changeability—of the things we take most for granted."

Starred Review. "Clarke Award-winner Jones creates several wondrous universes in which reality and fantasy bleed into each other. A sword-and-sorcery virtual world masquerades as therapy ('Red Sonja and Lessingham in Dreamland'). A self-harming princess and office worker makes a real marriage out of an evil spell ('The Thief, the Princess, and the Cartesian Circle'). Jones takes classic fairy tales like Cinderella ('La Cenerentola') or genre tropes such as the haunted house ('Grandmother's Footsteps') and reveals that the wonder and the horror lie not in glass slippers or creaking staircases but in the relationships revealed when 'dreams come true.' Jones's sharp writing forces the reader to reconsider the standard building blocks of SF in light of real human history, sociology, and radical analyses of power structures. As engineer-journalist Johnny Guglioli observes in 'Blue Clay Blues,' The technology is helpless to save the world. It's what goes on between people that fucks things up."   — Publishers Weekly, Nov 9, 2010

"[Gwyneth Jones] is at core a hard SF writer who can whip up an alien-artifact instantaneous transfer collider torus or a posthuman diaspora with the best of them, but it's uncommon when we see the same hard-SF rigor applied equally to issues of colonialism, gender identity, sexuality, or even parenting. The Universe of Things is the most comprehensive collection of her short fiction to be published in the US, containing 15 stories dating from 1988 to 2009, only seven of which appeared in her PS Publishing collection Grazing the Long Acre in 2009...."  —Gary K. Wolfe, Locus, Jan 2011