The Pleasures of Reading, Viewing, and Listening in 2010, pt. 28: Haddayr Copley-Woods 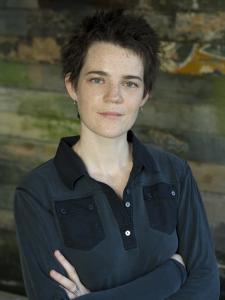 I love a good science read. Love love it. There are often good sources for solid scientific information that is even sometimes well written. But the confluence of convincingly presented statistics which refute common truisms, layman's-level language without losing a whisker of intellectual rigor, and lots of sly humor is truly rare.

Sex at Dawn: The Prehistoric Origins of Modern Sexuality by research psychologist Christopher Ryan, PhD, and practicing psychiatrist Cacilda Jethá, MD, is exactly that kind of book. I have not read such delightful, convincing, and readable science writing since the dearly lamented Stephen Jay Gould.

This book is funny, absorbing, clear-eyed, and deeply anti-patriarchal in a way that feels incidental to the facts rather than rising from any agenda -- which I find utterly, gleefully vindicating and deeply satisfying.

The stated agenda of this book is to prove that despite years of scientific and social leaders telling us that humans evolved to be monogamous, we in fact evolved to have multiple sexual partners either simultaneously or at least in fairly quick succession.

I think anyone who has paid the slightest bit of attention to the world around us would come to this conclusion: if monogamy were a deep and driving natural human force, why would we need social and legal laws to enforce it? Why, as the book points out, do some people risk stoning and death for extra marital sexual relations if it is our natural state to be blissfully, lifelongedly (shhhh it's a word now) monogamous?

Well, because it isn't human nature, that's why. 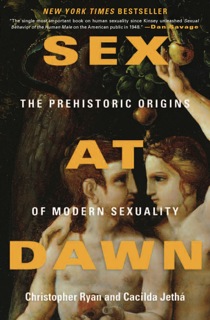 The authors go on at length to pull apart what they call the 'standard narrative,' first presenting the assumptions that have influenced so much of scientific and social thought, as well as their extremely flawed originators. This bit of social history was really quite eye opening, with titles such as "How Darwin Insults Your Mother (The Dismal Science of Sexual Economics)." They not only point out the forefathers' (and one mother's) nearly willful refusal to see the evidence in front of them, but they also point out the better way to interpret the same data in clear, no-nonsense and historically deliciously gossipy ways. They point out that the only apes which are monogamous are gibbons -- more closely related to monkeys than to humans. They also point out how rare lifelong monogamy is among animals entirely, killing such sacred cows as swans and penguins. Sorry, folks, but they practice serial monogamy -- like nearly every other supposedly monogamous animal. Prairie voles, which are famously set up to be an example to us (as we are so closely related, one assumes) will apparently have sex with anything that moves but will only sit next to their lifelong 'spouses.' Aw.

After tearing apart basic and truly flawed assumptions such as sexual competition and presumed desires for human males only to raise their own offspring (and thus control female sexuality), Jethá and Ryan turn to the actual evidence, looking at a wide variety of cultures throughout history and throughout the world to point out that so many aspects of human nature we feel are innate truly are instead cultural, such as sexual jealousy or marriage itself. What I found particularly refreshing was their refusal to exoticize and worship the 'primitive' as a somehow non-cultural being pure and closer to our ancestors than we are, yet still use the data of what few current pre-agrarian or nearly pre-agrarian societies we have at our disposal in real and convincing ways.

What I actually found the most fascinating about this book was not its stated premise, although they certainly make their point with a wealth of well-presented historical and physical data.

What was to me the most compelling was the way Ryan and Jethá pulled apart scientific assumptions by looking closely at the motivations behind various well-regarded evolutionary psychologists and primate scientists, and compellingly presented a pre-agrarian world which was not, as Hobbes called it: "solitary, poor, nasty, brutish, and short," but in fact communal, plentiful, peaceful, and long. I will leave him 'nasty' as apparently we were doing the nasty all the time, with pretty much anyone we wanted. Also there was no indoor plumbing.

Critics of evolutionary psychology point out that there is no way of knowing how we may have acted or interacted, although the fossil record does show that after humans managed to survive infancy, we had quite long lives before the agricultural revolution introduced famine, plagues, and bad nutrition. The authors of Sex at Dawn acknowledge this, and so instead of making suppositions beyond the fact that pre-agricultural times left us little to fight over, they look closely at the human body, and the practices of our closest ancestors, chimps and bonobos.

The human body, seen through the eyes of Ryan and Jethá, is fascinating, and tells a wonderful tale of competition on a cellular level -- and an equally wonderful story about cooperation between sexes rather than competition.

Their vision of what early humankind was probably like is far more compelling than the story we've all been told of men fighting over 'their women' and controlling the fertility of women much like gorillas, who are not terribly closely related to us in comparison with the freely sexual chimps and bonobos.

The premise I found so heartening and enlightening about this book had nothing to do with sex. It had to do with the patriarchal idea of individual competition. Of 'nasty, brutish' motivations between the sexes that are essentially at odds. It tears that idea asunder and presents us with a far more compelling idea, one that rings far more true: one of humans as distinctly human not by competing with each other, but by cooperating with each other. An idea of what makes us human not as warfare, but as communication, non-reproduction-based sexuality, and cooperation.

With lines like "Despite its lack of curlicues, the human penis is not without interesting design features," it made me laugh out loud every ten pages. Just as importantly, this book made me proud to be human.


REVIEWER'S NOTE: The last chapter is disappointing. I wrote the authors to ask about it, the difference was so striking, and it turns out to have been a concession to the publisher, hastily assembled in exhaustion. I'd suggest reading it in that light, or perhaps skipping it -- as it wasn't part of the original authors' vision.


Haddayr Copley-Woods' fiction has appeared in Strange Horizons and Best American Erotica. She is a regular commentator and blogger for Minnesota Public radio. She lives in Minneapolis where she works as an advertising copywriter.

Posted by Timmi Duchamp at 7:46 AM

Thanks a lot for this post, a friend sent it along to me (and half the internet).

I love this book, and I'm so glad you read it. Excellent review.

Thanks so much for writing this - I discovered this book a few months ago and I just can't get over it. I'm in the process of writing a related book, and there's just so much worthwhile in SoD. I hope SoD gives people a bit more license to explore themselves and seek out happiness in life how they see fit, as opposed to how the powers that be say is OK.

Good review, and sounds like a cool book -- thanks for reviewing it!

I have a google alert on this book, so i can see if other people feel the same way about the book as me, the reviews are split between wonderful reviews like this, and about 10% negative reviews that all seem to start with " I haven't read the book but.."
Wonderful review btw