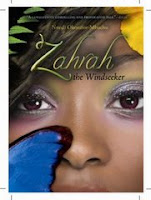 In case you missed this, Nnedi Okorafor's novel, Zahra the Windseeker, has been awarded the Wole Soyinka Prize for Literature in Africa. She has posted a photo of the trophy as well as an account of flying to Lagos for the awards ceremony and photos of Wole Soyinka, who made the award personally, herself, and her family at the ceremony. Here's a quick taste of her post:

The event was pretty elaborate. There was a full-length play (written by Promise Ogochukwu), beautifully dressed singers (who serenaded Wole Soyinka. This was pretty funny as I saw that Soyinka is very much a Nigerian man), poems were recited, awards were presented for younger writers, a little girl did a reading (what a ball of talent she was), there was dinner (mmmm, jallof rice and flan…since I don’t eat meat I stayed away from the chicken and beef and goat meat).

Of course, the approaching elections in the United States colored the air. “I want to say in a few days that history will be made,” Soyinka said as he spoke to the audience. Obama is well-loved in Nigeria.

Do check it out!
Posted by Timmi Duchamp at 2:53 PM