In NYC and Chicago, big-time, of course. But locally, here in Seattle? 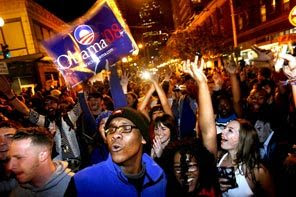 (Photo of people celebrating near the Pike Place Market, thanks to the The Seattle Times.)

People on my block are at this moment whooping and setting off firecrackers. And according to the Seattle Post-Intelligencer, "thousands" have "taken to the streets" in celebration. (That's so Seattle. We love massing in the streets here on the barest pretext.)

In Seattle thousands of people basically took over the street on First Avenue outside the Showbox theater, where an election night party was held.

Laura Bennett, 24, from Bremerton, voted for Barack Obama and was in crowd that prevented vehicles from moving. Some people got out of their cars and hugged passersby. Others were waving American flags, Obama signs and chanting "Yes we can."

"This is the most gratifying feeling that I've ever experienced as an American," said Bennett, who herself is half African American and half white. "I've been crying all day, it's almost too much too believe ... For the first time I feel like the person who is leading our country is representing who I am as an American and what I believe."

The Showbox was the site of an election night party held by The Stranger, an alternative news weekly.

The crowd at the all ages event was ebullient, bouncing around the venerable concert venue, which was packed to capacity.

More than a thousand more mingled outside, screaming and shouting and cheering, as passers-bys honked in support. Strangers hugged, high-fived, and danced around.


Since Aqueductista Jesse Vernon is on the staff of The Stranger, I expect she's there right now...

The Victrola, where Eileen Gunn and I have a writing date every Tuesday afternoon, had been advertising its "Election Night Celebration" for the last couple of weeks. Confident, aren't they, I remarked to her last week. Myself, I gave up election-night parties after the 1972 election... (McGovern vs. Nixon. And everyone knows how that one ended.)
Posted by Timmi Duchamp at 10:12 PM

Email ThisBlogThis!Share to TwitterShare to FacebookShare to Pinterest
Labels: Election 2008

Democrats take over NY state legislature for the first time since, what, FDR?

Wow! That's fascinating. I notice that on the mainstream media they've begun referring (like coy ingenues batting their eyelashes) to "the M Word." It's kind of hysterical, actually, watching them changing horses in midstream...

As far as Washington State goes-- our local media haven't yet called for Chris Gregoire (though the national media have). Nor has Burner been called. But things do look promising...

In the meantime, the partying downtown has apparently not even begun to peak. The news helicopters have all been out in force for the last half hour or more.

Correction: first time since FDR's presidency that both the NY Legislature and the Governor are Democratic. This means, if Prop 8 passes, that all the Californians who want their gay marriage recognized will have to move East. Good luck with your tax base, Arnold!

A lot of the rest of the world is celebrating with you I think ... in our little bit of down-under we are all very excited, happy and relieved... even our 13 & 15 year old sons were talking about it tonight!