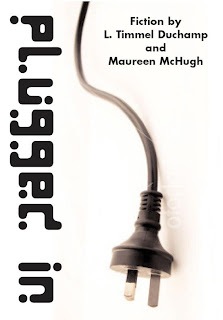 Update 6/6/2008: Plugged In is now available through Aqueduct's site.


This year at WisCon Aqueduct Press will be offering for sale a slim volume titled Plugged In, featuring stories by this year's Guests of Honor, Maureen McHugh and L. Timmel Duchamp (i.e., moi). Maureen's story, which was written specifically for the volume, is called "Kingdom of the Blind."

“In the kingdom of the blind,” Sydney said, “The one-eyed girl is king.” In “The Kingdom of the Blind,” Sydney, one of the codemonekys who maintain DMS, the software system that keeps the physical plants of the Benevola Health Network running, suspects the recent outages in the system may be a sign of the system’s sentience rather than due to simple corruption of its code. Her fellow geeks view the reset button as a possible if drastic solution for restoring the system’s integrity, but Sydney fears it might be a much too Final Solution...

My story is titled "The Man Who Plugged In," which appeared last year in the MIT Press volume re:skin, edited by Mary Flanagan and Austin Booth, in a gorgeous hardcover selling for $40. As far as I can tell, no sf reader or critic has even seen this story, and since it struck me as such a good match with Maureen's story, I decided to use it rather than an original story.

In “The Man Who Plugged In,” Howard Nies becomes the first male to plug into a Siemens Carapace. And as an ad in the February 2013 issue of The American Journal of Obstetrics and Gynecology notes, the Siemens Carapace is “a prenatal cradle of caring” at the cutting edge of technology, “made of the finest, strongest, most lightweight materials ever produced. Its clean, round lines and soft, silvery matte finish can’t fail to reassure both the parents and the gestational carrier who wears it that the child within is getting better care and protection than any naturally gestated child…”
Posted by Timmi Duchamp at 4:56 PM