The Pleasures of Reading, Viewing, and Listening in 2017, pt.15, Rosanne Rabinowitz 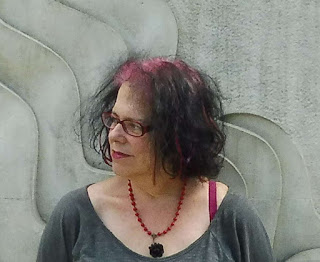 The Pleasures of Reading, Watching, and Listening
by Rosanne Rabinowitz

I’m a new Aqueductian who was pleasantly surprised by Timmi’s invitation to contribute to this regular end-of-the-year roundup – so my most recent reading, watching and listening pleasures will loom large in my account.

I'll start with last week’s binge on the new Netflix series Dark, an import with one foot in the 1980s and others in 2019 and 1953. The series has been described as a German version of Stranger Things, albeit with an older and not-so-cute crowd of kids. There are no people-eating monsters either, but we face murderous humans along with the complexities of time travel and its effects on three families in a village near a nuclear power plant. Young boys disappear while corpses appear; small-town passions seethe and hidden histories surface. The narrative hops along several timelines, as do several of the protagonists.

Well, I’m always up for a good time travel yarn. I have a sense that the series is riffing on – and against– classic 1980s time travel capers like Back to the Future and Bill and Ted's Excellent Adventure.

But it's not such an excellent adventure for young Mikkel, a boy who finds himself stranded in the 1980s. This situation has been mined for laughs in the past (Hot Tub Time Machine, anyone?) but here I was genuinely moved by Mikkel's terror and deep sadness as he is torn out of his world and displaced in another. Though he finds an adoptive family and goes on to marry and have children he never recovers from this wounding.

The visual and emotional palette is sombre and mysterious, helped by a haunting musical score. Sometimes the angst teeters on the edge of parody, as if we’re in Back to the Future as directed by Ingmar Bergman. In the middle of the series I really was expecting a geezer in black to turn up for a game of chess. Some might find that a fault, but it added to my enjoyment. Oh yes, I love a good mash-up. And I’d definitely love to see one where the Stranger Things kids have intense discussions of fate, mortality and theology while zipping about on their bicycles in their Ghostbusters outfits.

So if you think you'd enjoy a 10-episode helping of Teutonic time-traveling gloom, Dark is for you. I'd add that there are glimmerings of humor here and there, especially when a version of the grizzled 'grandfather paradox' gets another airing. I laughed when teen-aged Jonas, who ventures into the past to search for Mikkel, expressed his confusion: "Now I have another grandma, and she’s the principal of my school... Her husband, who’s fucking my mom, is looking for his son, who’s my father! A few days ago I kissed my aunt..."

Any thematic continuity was unintentional, but when I downloaded The Rift by Nina Allan I found myself venturing again into a story centered on a disappearance. Selena’s sister Julie goes missing at the age of seventeen. Then Julie 20 returns years later, with a tale of a narrow escape from death and time spent on another planet. There are resonances of the loved one returned from the realms of faerie. Are they the missing person, or someone else? The Rift is a haunting and ambiguous tale.

Another recent read is Swingtime by Zadie Smith. In this novel Zadie returns to her home turf in north-west London, and ventures much further afield as well. Two young women grow up: one is a talented dancer and another is not so talented, but a good adapter who ends up working for a Madonna-esque superstar. This book sped by; I found it moving and also full of laugh-out-loud satire. It's the best I've read from her, as I’ve had mixed feelings about Smith’s earlier work. While responding to its wit and perceptiveness I often found it rather detached in tone. This time Smith brought me up close to her characters in a novel that brims with sense of place and time – and sense of person as well.

I would also recommend The Underground Railroad by Colson Whitehead, which won the Clarke Award, the Pulitzer and possibly some other accolades as well. This book was chosen by a care client as a birthday present, and I read it out loud to him with great pleasure. It tells the story of Cora, who struggles with oppression as a slave plus isolation within her own community. While it is a harrowing narrative of slavery and racism in the southern US, it also shines with Cora's vital determination to be free and build a better life with others: “The world may be mean, but people don’t have to be, not if they refuse.”

The underground railroad in this book is an actual steampunky railway used by the slaves to escape into alternate places and futures. Some of these are not what they seem and the best of them are not likely to last forever. The nature of the railway is never explained, and readers of science fiction are free to come up with their own theories. Wormholes, parallel universes? The 'wow' factor never overwhelms the horrific reality of slavery but offers another way of looking at resistance to it.

Looking back earlier in year, other books of note were At Night We Walk in Circles by Daniel Alarcon The Nix by Nathan Hill, The Bricks that Built the Houses by Kate Tempest, The Power by Naomi Alderman and The Savage Coast, a rediscovered novel by poet Muriel Rukeyser. I also read some biography – from Susie Bright's memoir Big Sex Little Death to Lynne Segal's Making Trouble and Out of Time, to bassist Peter Hook's recap of his years in Joy Division, Unknown Pleasures.

I’ve seen a lot of films in the past year, but the one that stands out in my mind at the moment is Here to be Heard: The Story of the Slits – an inspiring montage of interviews and footage of the female-led first-generation punk band.

I'll end with linking to an article that I read and posted in December 2016, just after Trump's election: Notes from the Resistance: a Column on Language and Power by Summer Brennan. I've recently reread it and still find it a powerful inspiration to any writer who ever has doubts about whether putting words onto paper (or disc) is a worthwhile thing to do: http://lithub.com/notes-from-the-resistance-a-column-on-language-and-power/

"Words have power. We fight back by correctly labeling; by calling a white supremacist a white supremacist, a fascist a fascist, a sexual assault a sexual assault. We name what is happening or about to happen around us: kleptocracy, kakistocracy, authoritarianism, fraud, corruption, embezzlement. We can creatively add to the taxonomy of tyranny even as we feel ourselves buried alive by it: idiocracy, dystocracy, misogynocracy... The hijacking of public language, as is happening now, is a way to shift perception—to bend and control thought—and must be resisted.I would like to invite readers to join me in doing this. Get a diary or journal and write down as many words as you can that relate to the things that you value. Fascism favors sameness; it represents a desertification of language and thinking. You can fight sameness with diversity."

Rosanne Rabinowitz  helped produce radical London-based women's zines in the 1980s/90s such as Feminaxe and Bad Attitude. She has a creative writing MA from Sheffield Hallam University. Aqueduct published her novella  Helen's Story as a volume in the Conversation Pieces series in 2017. Resonance and Revolt, a short story collection, will be published in early 2018 by Eibonvale Press (https://www.eibonvalepress.co.uk/books/books_resonance.htm).

I forgot that I read The Underground Railroad this year when I did my post. I liked it a lot, too, and like your take on it. I've been a huge fan of Whitehead's work ever since I read The Intuitionist years back.

Whitehead's other books are on my reading list for next year!