Here are a few notes I jotted while attending the Women Destroy Science Fiction: Not Again! panel at Potlatch on Saturday afternoon:

Kate notes that the iconography of the cover is pretty much the same as that of the second Women of Wonder books of 20 years ago: featuring a kick-ass babe.

Debbie loves the scope of the book but wishes that the nonfiction hadn't all been reprints of the fundraising pieces. She raises the question: What is the value of assembling all-women issues together?

I can’t help but note that this question is one that people have been raising for decades now. Are the answers different now than they were in the past. (Which may be to say: I feel as if this is yet another iteration of the constant reinvention of the wheel so familiar to experienced feminists.)

Debbie: A big fear about this book-- is that no one who isn't already onboard will read these stories.

Eileen: We are the choir. And we're no longer a little isolated corner of the field.

Aud: What is it that needs to be done?

Nisi: Pardon me for pointing this out, but my essay in the book sets out some of the things that need to be done.

Kate: One of the things that needs to be done is that fiction needs to continue to be published. Print markets are limited, each market controlled by an editor, each with their own limitations. Gordon Van Gelder, to take one prominent example, has particular limitations. (I like Gordon, but I don't much care for his taste in fiction.) (And yes, I’m pleased to hear that Charles Finlay is taking over the editorship of F&SF. And as long as the stories by women have to be ten times better than those by men, we're not there yet.

Eileen: For myself, I'm wishing for liberation from all the little subgenres. Being a woman is being in one of those little boxes.

Debbie: How has the pressure against women in sf changed?  The people we are angriest at have very little power, unlike in the past. I think it's important to think about where the power is.

Aud: Would this book have had the same impact if it hadn't been packaged as "women destroy science fiction"?

Kate: No. There would have been a different impact.

Eileen: I thought on first hearing about the project that this was a marketing decision. Now that I see it, I think the book could have done well without the marketing tag. But with the marketing tag, it's political and angry—and produces a larger voice.

Eileen: That’s true even of Hal Clement's work, long-considered the hardest of hard sf writers. How many people here have read Mission of Gravity? [only a few hands went up, one of them mine.] If a woman writes it, it's not really sf. If a man writes it, it is. For years and years I thought I was writing science fiction. Now people are telling me that what I write isn’t science fiction. It’s an unconscious thing they do. If I were a man, they’d accept that whatever I wrote was science fiction.

When Kate asked for last thoughts with which to end the panel, Eileen said: It's an sf writer's job to destroy science fiction, fantasy, and horror. 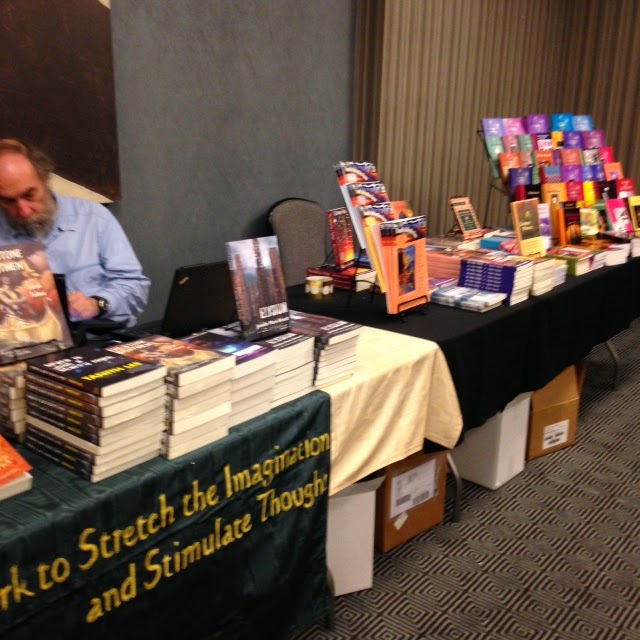 I'd be interested to hear what this blog's readers might have to say on the subject. My impression was that the audience contained a range of attitudes, many of them expressed in comments or questions from the audience. One older man apparently didn't see the relevance of the issue; some fired-up younger women apparently didn't realize that we'd been working on this problem for a long time already; some grumpy older women expressed pleasure in seeing young women energized and angry (because as Eileen put it, she's been angry for forty years, and it's good to be joined by younger women in that anger) and happy to see so much quality fiction by women getting recognition; and a lot of people wondered how it could be  that, as "the choir" (as Eileen put it) continues to expand so tremendously it is still being perceived as different and requiring qualification marking it as different.
Posted by Timmi Duchamp at 4:21 PM

Email ThisBlogThis!Share to TwitterShare to FacebookShare to Pinterest
Labels: Potlatch

I have been wondering why the panel consisted of three white women over the age of fifty -- some of us *well* over the age of fifty -- none of whom were associated with the anthology. What was remarkable about the anthology was the diversity of the people in it (given its admitted gender bias). Why wasn't the panel at least equally diverse? Where were the younger women? Where were the people of color? Where was the token man, for Pete's sake? This must have been planned, but why?

Maybe none of "the younger women... the people of color... the token man" volunteered to be on the panel.

Well, that's why I'm asking, Mike. Maybe there was some larger plan that didn't quite work out?

I spoke with Kate Schaefer, the panel organizer, who filled me in on the answers to my questions, which I share with you: "The reason there were no contributors on the Potlatch Book of Honor panel is simple: that panel is always a readers’ panel, not a writers’ panel. The book of honor panel works somewhat like a book club meeting, a book club that only meets once a year. It was great to have some of the contributors in the room and able to talk about the book as well. The younger people question: I did ask one younger person, but she wasn’t able to be on the panel, and I didn’t have bandwidth or time to recruit another. I was also deliberately keeping the number of panelists small so that the focus would be on the people in the room getting to talk rather than all the talking coming from the people on the dais." Thanks, Kate!