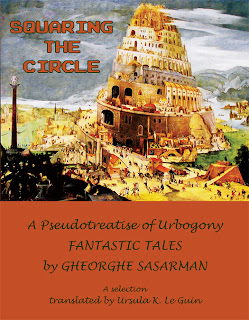 Aqueduct Press has just taken delivery of Squaring the Circle: A Pseudotreatise of Urbogony, which collects 26 fantastic tales by Gheorghe Sasarman, selected and translated into English by Ursula K. Le Guin. The printed book is a small gem: Kath has outdone herself in designing this one, which includes graphics for every tale, provided by Mr Sasarman. We're selling both the printed book and the e-book editions now through Aqueduct's site (www.aqueductpress.com), and they'll shortly be available in the usual places.

There's a story behind this book (no, actually at least two stories, first the author's, and then the translator's), which I'm happy to relate to y'all. And we have a lengthy, thoughtful blurb from Eleanor Arnason (which we couldn't use in its entirety on the back cover of the book) as well as two advanced reviews. So. Let me start with the stories behind the book. Mr. Sasarman writes in his postscript to the French edition of the book:


The idea of writing a book of brief descriptions of imaginary cities, condensing into it the grandeur and tragedy of five millennia of urban history, came to me by chance, while I was in charge of the Architecture and Urbanism section of the review Scanteia.  A writer had protested in an open letter against the demolition of an historic building, and the editors asked me to respond, which I did by writing the story “Musaeum.”  It was the autumn of 1969, a year after the Russian tanks invaded Prague, an invasion openly condemned by Ceausescu, a time when many people, not only in Bucharest, believed (what a mistake!) that Rumania was evolving towards democracy.

By the time Ursula saw the book, it had been published in French and Spanish translations. She first encountered the book in the Spanish edition, rendered by translator Mariano Martín Rodríguez. As she writes in her introduction to Aqueduct's edition of the book:


A year or two ago I was sent a handsome little book titled La Quadratura del Círcolo. It was inscribed to me in English and a language that I thought was Rumanian. With it was a charming letter from Mariano Martín Rodríguez, explaining that the book was his translation from the Rumanian original by Gheorghe Sasarman, and that both he and the authorhoped I would find it interesting and might have some idea how to go about finding someone to translate it into English.

The book was a set of brief stories, each about a different city—like Italo Calvino’s Invisible Cities, of which I’m very fond. That similarity was interesting, and the first couple of stories seemed promising, but I was busy, and my Spanish is slow. So after thanking the sender and author I did nothingabout the book for quite a while. But it kept on lying around in one place or another in my study. Maybe just because I liked the cover (a splendid Tower of Babel by an anonymous Fleming), or maybe because it was exerting the effect.

Some books, unread books, exert the effect. It’s not rational,not easy to explain. They don’t glow or vibrate, though that’s what they’d do in an animated movie. They just are in view, they’re there. There’s this book, on the shelf in a book store or the library or like this one in a pile on my desk, and it is visible, silently saying read me. And even if I have no idea what it is and what it’s about, I have to read it.

So, gradually, I obeyed.

The end result of Ursula's compulsion was the book Aqueduct published.

And then there was my own compulsion... Aqueduct Press exists to publish feminist science fiction. Squaring the Circle is by no stretch of the imagination feminist. (In fact, Publishers Weekly's review make an oblique point about this.) Nevertheless, these spare, dryly and mischievously humorous tales conjured such visions in my mind that I couldn't resist them and found myself agreeing with Ursula that they needed to be available to the part of the world that reads mostly English-language texts. In fact, sitting here at my desk, typing with the book before me, every time I stop to look something up in the book, a random sentence on a random page will catch my eye, and I'll just have to read the entire tale. (I've done this three times since I started writing this post.) The tales are short, of course. but I'm pretty sure that most people will end up reading them more than once.

Now, to Eleanor's praise for the book:


Squaring the Circle reminds me of some of my favorite books: Italo Calvino’s Invisible Cities, Angelica Gordodischer’s Kalpa Imperial and Ursula K Le Guin’s Changing Planes. I don’t know if there’s a name for this kind of fiction – Faux history? Fantastic geography? Imaginary anthropology? Whatever it is, I love it. Humans have always liked to hear about fabulous journeys and strange distant places. Othello told Desdemona, “of the Cannibals that each other eat, The Anthropophagi and men whose heads Do grow beneath their shoulders. This to hear Would Desdemona seriously incline.” Maybe books like this meet our need for amazing stories, now that the world is mostly mapped.

Squaring the Circle is highly readable. (I got it through in one sitting.) And it’s fun. There is a playfulness in this kind of fiction, a subversive undercutting of the 19th-century idea of the novel. It gives us all the pleasure of a travel guide, and the additional pleasure of being – in spite of the meticulous description -- unreal. As it turns out, a cityscape can be as interesting as a bildungsroman and as meaningful. The first section of Squaring the Circle, “Vavylon,” is a fine description of a class society that claims to be egalitarian. Anyone can climb to the top of ziggurat, except the ramps are greased. I thought of Stalinist Romania when I read it, but it could also apply to the US.


These trippy, cutting 24 stories, chosen by SF/F grande dame Le Guin from a collection of 36 originally published in Romanian in 1975, inevitably draw comparisons to Italo Calvino’s Invisible Cities. Both explore society and human psyche through architectural descriptions of imaginary cities, but Sasarman’s masterfully crafted prose poems feel more immediate, serving as spellbinding descriptions of architectural impossibilities as well as slyly subversive social commentary. The equality of all citizens is an enshrining principle of the ziggurat Vavylon, with steep ramps oiled every day to prevent ascent, though descent is very rapid. The elite of Musaeum create immortal artworks that remain unknown, for they are too busy with their own works to look at one another’s. The intrepid explorers of Selenia vainly hunt for a building site uncontaminated by the psychic refuse of Earth’s poets, lovers, and dreamers, which litters most of the lunar surface. Perhaps the only area where Sasarman falls short is in his rare, dismissive portrayals of women (Le Guin’s introduction implies some of the untranslated stories are worse in this respect), all the more startling when contrasted with the extraordinary, timeless nature of his prose. (May) Reviewed on: 03/11/2013

And here's a bit of Rick Kleffel's review:


Any one of these stories will craft in the reader's mind an entire world, a society, a country and then slowly but surely transform that imaginary way station into a refracted aspect of what is happening here and now, and ever and forever. This is the sort of book that is well worth seeking out, as are the cities of the imagination it creates for us. —Rick Kleffel, The Agony Column, Jan 30, 2013 (read the whole review)

Posted by Timmi Duchamp at 6:03 PM

The cover is wonderful!