Joanna Russ Issue of the CSZ 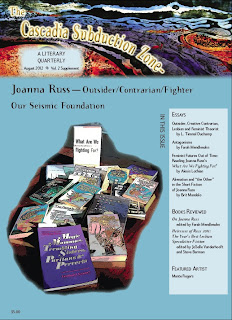 I'm pleased to announce that the Cascadia Subduction Zone has just published a special issue on Joanna Russ. "This issue of The Cascadia Subduction Zone is supplemental, published without regard for our usual schedule and distributed free of charge to subscribers. For the editors, it’s an exceptionally special issue we began planning shortly after Joanna Russ’s death last year. When I think about Joanna Russ’s relationship to feminism and feminist science fiction in general and to the work the CSZ aims to nurture and provoke in particular, Christine de Pizan’s brilliant conceit of the City of Ladies comes to my mind. The medieval thinker constructed her “City” of every powerful, accomplished woman she knew of. Russ’s work, always powerful and challenging, is more than a brick in the wall of our city, though; it is a substantial element of its foundation. Foundations are tricky things, especially in the seismic times in which we live. They are invisible to those paying only casual attention to the buildings they support.
But for the inhabitants of any building, the foundation matters tremendously." (Quotation from my introductory essay)

Feminist Futures Out of Time: Reading Joanna Russ’s
What Are We Fighting For?
by Alexis Lothian

Posted by Timmi Duchamp at 1:34 PM