The Pleasures of Reading, Viewing, and Listening in 2011, part 22: Liz Henry 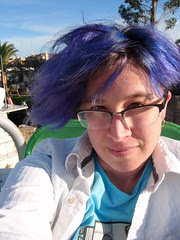 This year I was very happy at the mind-expanding, complicated, beautiful books that came my way. All my reading, viewing, and listening was enhanced greatly by looking things up in Wikipedia (and sometimes editing Wikipedia to correct information or add articles on people not listed.)

Redwood & Wildfire by Andrea Hairston. Gorgeous and complicated story. I loved the way the Chicago World's Fair (and time travel) was woven into the story, and everything about Redwood's perception of the world, her path from the rural South to Chicago, her friendship with Wildfire, and the way she lived her life in general. The novel also kind of pieced together some of my other readings in African American history and autobiography so I felt that stories only implied in other books got told (and told beautifully). I love Hairston's writing especially for revealing complicated imaginary things that feel like true things.

Who Fears Death by Nnedi Okorafor. A story of a young woman named Onyesonwu and her friends, in a far-future post-apocalpytic (and magical) Saharan Africa. It's hard to write about my responses to this book but I highly recommend it. It was an amazing exploration of what a feminist hero-tale can be.

Cold Magic and Cold Fire by Kate Elliott. Fabulous fantasy in an alternate history that feels sort of early-industrial-revolution steampunk, with a blend of West African and Celtic cultures dominating Europe, and the Taino and some lawyerly feathered dinosaurs in North and Central America. I loved how the story started as a girls-in-school novel and then twisted and exploded several times to shatter all my expectations.

This Shared Dream by Kathleen Ann Goonan. I keep saying that this sf novel is like Woman on the Edge of Time but in reverse. It's in a timeline that is just a little bit "better" than ours and there are some very interesting women hopping timelines, going crazy, figuring out their own family histories and coming to grips with utopianism in general.

Baba Yaga Laid an Egg by Dubravka Ugresic. Past Tiptree winner, and well worth a read!

Among Others by Jo Walton. Do I even need to say anything? This book was awesome! Especially if you grew up loving books and SF.

Eon and Eona by Alison Goodman. Another book about dragons! Complicated gender politics! Trashy and fun.

The Freedom Maze by Delia Sherman. A pre-teen girl goes back in time and experiences slavery first hand. This book reminded me strongly of another excellent time-travel book, A Girl Called Boy by Belinda Hurmence. I recommend them both!

The Warriors series by Erin Hunter. I read a lot of this mega-series about tribal tabby cats who live in a forest, because my son was reading them. The writing made me cringe but I came to appreciate the dramatastic story lines and angsty, meowing characters. It is notable for having decent gender politics for a fantasy series. Female and male cats can be in all the available societal roles, but the female cats do worry about pregnancy and motherhood affecting their careers.

For the Win and Makers by Cory Doctorow. Very cool and political explorations of Internet gaming and 3D printing technology.

At the Dark End of the Street: Black Women, Rape, and Resistance--A New History of the Civil Rights Movement from Rosa Parks to the Rise of Black Power by Danielle L. McGuire. This book is so crucial! I felt very grateful to McGuire for bringing all this history together around a coherent theme of black women's political activism in the U.S. over the entire 20th century -- centered around anti-rape activism.

The Revolution Will be Digitised by Heather Brooke. Brooke goes through her personal stories of encounters with Wikileaks folks, outlines the history of Wikileaks in general, and then winds up with a final chapter, best part of the book, that is a fierce political rant about freedom of information, the Internet, political resistance, and revolution.

Hands on the Freedom Plough: Personal Accounts by Women in SNCC. Fifty-two different women involved with the Civil Rights Movement in the U.S. tell their stories of political activism.

A Pattern Language. This enormous doorstop of a book put together dozens of architectural and city planning concepts in a hypertext-like structure which became an inspiration to software engineers in their creations of patterns and anti-patterns. It's very lovely!

4D Timelock by Buckminster Fuller. A very strange manifesto from 1928 about modular houses, blimps, city planning, and The Future! published by Fuller as a mimeographed zine. My edition is reprinted with many letters from and to Fuller. Bizarre and fascinating!

Army Life in a Black Regiment and Black Rebellion: Five Slave Revolts by Thomas Wentworth Higginson. Higginson was a white Union officer who led the first black regiment in the Civil War. He was an abolitionist, can be deeply racist in his writing, but is interesting and chronicled some things I hadn't read about elsewhere. These books are free for Kindle on Amazon and you can also get them from Project Gutenberg.

A Lady's Life in the Rocky Mountains by Isabella Bird. Another free book. I read several of Bird's travel books and enjoyed them all, especially this one and the one where she goes to Hawaii.

Letters of a Woman Homesteader by Elinore Pruitt Stewart. Stewart tells the story of going west from Denver to stake out a homestead. She gets married but does all the work on her own claim, separately. It is especially awesome how she hops on a horse with her 6 year old kid and camps out on the mountain with a shotgun, in the snow. She has skills!

White on Black by Ruben Gallego. Fiery and angry memoir of vignettes from Gallego, who grew up in an institution for disabled kids in Russia. He survived, unlike nearly everyone else in the book. I highly recommend this book to people with disabilities and others who want a bit of consciousness raising. It is beautifully and poetically written.

A Great Place for a Seizure by Terry Tracy. Oddly this biographical fiction goes well with This Shared Dream and Among Others. It has a haunting feel of being speculative fiction, though it isn't. It's the story of a young woman's life and how she organizes the narrative of her life internally around the experiences of her seizures. I really loved the end...

Underground: Tales of Hacking, Madness, and Obsession on the Electronic Frontier by Suelette Dreyfus. An excellent book about hackers and hacking, much better than most.

I Made My Boy Out of Poetry by Aberjhani. My friend Nordette, a poet and political blogger from Whose Shoes Are These, Anyway introduced me to Aberjhani's work and it's all well worth reading. In this book I best loved "Portrait of my Heart that is a Nation".

Bug Death by F.A. Nettelbeck. Brilliant, weird poetry by my friend Fred, who died this year.

Amelia Earhart by Maureen Owen. Not new to me, but still one of my favorites for its controlled flight through imaginary and historical space.

I played a lot of Oolite (a ported and expanded version of Elite) this spring and really enjoyed its simple (retro) beauty, especially the meditative quality of flight and then the gorgeous and tense docking maneuvers.

I also showed Zork to my 11 year old son who enjoyed trying to map the world and the weird feeling of being in a place mediated by only text. The inconsistencies of the mapping frustrated him a bit so I'm thinking of starting him again on Zork II or the Hitchhiker's Guide text adventure.

I continue playing a simple game on my phone called Drop7, which is Tetris-like but with numbers and interesting strategy. It's very soothing! You can get it on Android and iPhones.

On the iPad, I played all the way through Peggle, which is just strategic enough to be fun without requiring much mental effort. When you win a level, Ode to Joy starts playing with fireworks and rainbows and sparkles, one of the funniest expressions of or commentary on the minor rewards of video games I've ever seen.

Here, have a fantastic music blog with easy downloads of rare West African records from the 50s, 60s, and 70s! http://orogod.blogspot.com/

I also enjoyed Ana Tijoux, Tullycraft, listening to all of Poly Styrene and the X-Ray Spex, and all of Betty Davis's albums of awesome funk. They Say I'm Different is one of the best albums ever!

I watched Frozen Planet, some of Life on Mars, some of Portlandia, and a hell of short clips on YouTube.

* Have some Best of Maru compilations! Maru is the cutest cat ever!

* Pumped Up Kids|Dubstep by RemoteKontrol is an extremely beautiful dance video to the point where you may wonder if you're hallucinating, as the dancer goes through movements recalling fast-forward, slow motion, digital animation, and breakdancing/hip hop moves.

* The little sith girl video in which an 8 year old girl instead of following the obvious script to reject Darth Vader, accepts his offer to join the Dark Side and bows at his feet on stage. Interview at Meet the Little Sith Girl: Sariah Gallego! in which Sariah explains she is tougher than Vader and has a plan to learn all his secrets and then kill him so she can become the most powerful person in the Universe.

* If you are wondering what's up with the bronies, this My Little Pony Physics Presentation might shed some light.

* And finally, Martin Solveig featuring Dragonette made me laugh very hard in this 80s-tastic music video, Boys & Girls.
Posted by Liz at 2:32 PM