In 1952, Lion Books published Jim Thompson's first paperback original, The Killer Inside Me. This noir Western is told from the point of view of Texas deputy sheriff Lou Ford, a sadistic psychopath who tries to hide his homicidal career behind a slow-witted, folksy, generous façade. Like many of Thompson's first-person narrators, Ford is a wry, witty, and cultured man with a clear view of society's ills and a gift for rationalizing murder. The Killer Inside Me ruthlessly parodies pulp clichés, among them the heroic masculinity of the Western marshal, the homespun simplicity of the populist leader, and the sexual conservatism of the hard-boiled detective. Ford blames his homicidal nature on sexual proclivities that he traces to a childhood trauma, but the story raises the possibility that his murders are completely calculated and self-serving acts of vindictiveness, independent of his 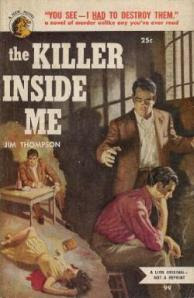 The Killer Inside Me is so dependent on the first-person point of view and on being part of the genre it parodies that it really can't work outside the print medium. So it should come as no surprise that the new movie version of the novel is directed by Michael Winterbottom, the man who brought the equally unfilmable Tristram Shandy to the screen. Nor, given the subject matter, should it be news that siwoti in response to it (one commenter wrote, "To regard women as eager to be beaten to death is to regard them as other than human." I think it unlikely that women in JT are indeed "eager to be beaten to death," although a number of them are too trusting of men whom they know to be violent--a problem that does occur among human beings in real life). I found the film to be okay but far from brilliant: here are thoughts on its achievements and its major faults, with a note or two rebutting some claims that are wrong on the internet.

So: Good-looking and at times witty movie, reverent toward its source material, with many good performances, that works as a mood piece and a character-study but not as social criticism, unless you regard misanthropy as a critique. And be aware if you plan to watch it that the filmmakers have decided to render two scenes of violence against women very vividly. There is decent commentary here and there in the review media: Not Roger at the Chicago Sun-Times has some thoughtful (and some thoughtless) remarks, starting with a nice account of what noir fiction feels like; but more interesting than the review itself is his discussion with the commenters: "To say that the movie doesn't explain murderous sociopathic behavior is . . . not the same thing as saying this movie offers no insight into Lou's character." And I very much liked the review in the Everett Herald (Go Aquasox!).

*The practice of writing characters for audiences that make simplistic judgments also creates a problem in the presentation of one of the women in the story. The Thompson protagonist, in The Killer Inside Me, in After Dark, My Sweet, in Savage Night, and in A Hell of A Woman, goes through an anagnoresis where he realizes that the woman he's regarded as a threat and a harridan (and in some cases killed) was a regular, struggling human being like anyone else. But the movie cannot, for example, present Amy Stanton as particularly annoying, lest it signal to the audience that they're expected to sympathize with Lou's wanting her out of the way. So we get less understanding of Lou's perceptions, and she gets very little in the way of a personality.
Posted by Josh at 9:45 PM