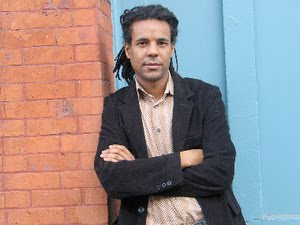 A breakdown in my health that lasted from mid-2009 to early 2010 left me unable to submit an interview I'd conducted with Jennifer Egan to the academic journal it'd been destined for. To my delight, the editors of Guernica Magazine expressed an interest in the piece, contingent on my trimming it from 9,100 words down to about half that length. It appeared in that venue a week ago, adding to a long line of worthwhile Guernica interviews, and has already been linked by feministing and Silliman, among others.

An uncomfortable moment occurred when an editor asked me to talk about her good looks in the introductory passage. I'd hoped we'd come a long way from Harlan's "Not only is she a fine writer, she looks great in a bikini" forty years ago: I mean, would I have been asked to write about Colson Whitehead's good looks? Ah well, she's survived that journalistic formula before. But I tried to camp it up, with references to a gay novelist's aesthetic and the effects of horizontal stripes: see my Jennifer Egan interview here.

My other reservation about the interview is that, thanks to the abridgment, there's not a lot to contextualize the references to her fiction that I make in our conversation. So here, an Ambling Along the Aqueduct exclusive, is a paragraph I wrote for the intro explaining who's who in Egan's Look at Me:

Egan’s second novel, Look at Me, was a National Book Award finalist in 2002. The novel is an epic fable about identity, credulity, and what an understanding of postindustrial America can do to your head. Among its enduring strengths is its gallery of deeply imagined characters, including such satirical figures as Paparazzo Spiro, a fashion photographer who believes he can literally cut through the inauthenticity of the world by slicing into his models’ flesh with razors, and Thomas Keene, an insecure Berkeley graduate who becomes a ruthless entertainment executive upon finding that his métier is putting ordinary people’s lives on the Internet. The novel’s most sympathetic adult characters are a terrorist and a psychotic, both of whom find themselves working as teachers in Rockford, Illinois while trying to understand the “conspiracy” that they see in history. The terrorist, Michael West, gradually discovers that his talent for disguise and imitation can be put to more lucrative uses than political violence. The psychotic, former high school football star Moose Metcalf, has already committed an act of terror: he conducted a pedagogical experiment at Yale using “enough explosives to blow [his classroom] and everyone in it to high heaven, presuming there was such a place.” Incarcerated and then reduced to an adjunct instructorship at Winnebago College, Moose struggles with the stigma of mental illness that keeps him at a distance from his family and colleagues, and yearns for a disciple to share his transcendent vision of history. Like Bleak House, Look at Me is intermittently narrated in the first person; but its fairy-tale heroine is a caustic has-been model, Charlotte Swenson, whose journey from New York back to her native Rockford connects her to all of the other disparate characters.

The Paris Review has another fine Jennifer Egan interview, which complements mine in interesting ways.
Posted by Josh at 1:52 AM