"Actually, kind of an SF geek" 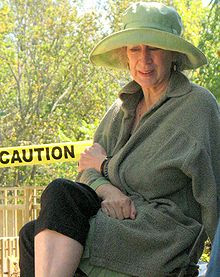 If I interviewed her, I'd have to ask some hard questions. And here again, at KQED, I was destined for a happy surprise. Atwood proved to be immensely charming and, what's more something of a scholar of science fiction. She wrote a paper on turn-of-the-last-century SF, and was tossing about 'The Purple Cloud' and even more obscure titles as we talked. I did ask her directly about science fiction, speculative fiction, space squids and talking cabbages. The bottom line is that Atwood is something of a science fiction fan and actually, kind of an SF geek, in that she knows all sorts of things about the genre that most folks can't spout off at the tip of a hat. The dry sense of humor you'll find in her books (you need the right sensibility to do so) is ever more apparent when she speaks. I had an absolute blast talking to her; and I think when you give the interview a listen, it should once and for all crush the idea that she's a literary elitist who sees herself above the genre. It's actually rather the opposite, because she clearly respects the knowledge of science required to write what is generally termed as "hard science fiction." To have your head turned round with regard to the delightful Margaret Atwood, just follow this link to the MP3 audio file of our conversation.

I've been saying this about Ms. Atwood for years. But few will even listen and even fewer want to believe it. So many prefer to believe she's an elitist, ignorant enemy of the field.

It's important to understand why so many want / need to believe this canard about this excellent writer. It's related, surely, to the same syndrome that must believe that Pres. Obama isn't a U.S. citizen, is a socialist-Muslim-nazi-racist. No matter what proofs are presented, they will not believe because they don't want to. They need to believe he is any or all of these things because it provides the excuse to hate him, because they want to feel victimized by him, because they want to hate him.