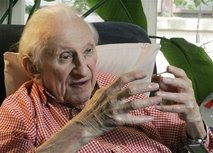 Studs Terkel, the activist, writer, and oral historian who survived the infamous McCarthy-era blacklist and later won the Pulitzer Prize, died today. Much of his work examined the lives and experiences of ordinary working people--the folks, that is, who are usually left out of historical narratives. In her obituary of Terkel for the AP, Carolyn Rousseau writes

He was a cigar and martini man, white-haired and elegantly rumpled in his trademark red-checkered shirts, an old rebel who never mellowed, never retired, never forgot, and "never met a picket line or petition I didn't like."

"A lot of people feel, 'What can I do, (it's) hopeless,'" Terkel told The Associated Press in 2003. "Well, through all these years there have been the people I'm talking about, whom we call activists ... who give us hope and through them we have hope."

The tougher the subject, the harder Terkel took it on. He put out an oral history collection on race relations in 1992 called "Race: How Blacks and Whites Think and Feel About The American Obsession," and, in 1995, "Coming of Age," recollections of men and women 70 and older.

He cared about what divided us, and what united us: death — in his 2001 "Will the Circle Be Unbroken? Reflections on Death, Rebirth, and Hunger for a Faith," and hope, in his 2003 "Hope Dies Last."

Andre Schiffrin — Terkel's longtime editor, publisher and close friend who gave Terkel the idea for many of his books — said Terkel "had been in bad shape in recent weeks and he really felt that his life had come to an end. But he was as engaged as ever. He was a big fan of (Democratic presidential candidate Barack) Obama and he said one of the things that kept him going was that he wanted to see the results of the election."

For his oral histories, Terkel interviewed his subjects on tape, then transcribed and sifted. "What first comes out of an interview are tons of ore; you have to get that gold dust in your hands," he wrote in his memoir. "Now, how does it become a necklace or a ring or a gold watch? You have to get the form; you have to mold the gold dust."

Said Schiffrin: "He liked to tell the story of an interview with a woman in a public housing unit in Chicago. At the end of the interview, the woman said, `My goodness, I didn't know I felt that way.' That was his genius."

Terkel would joke that his obsession with tape recording was equaled by only one other man, a certain former president of the United States: "Richard Nixon and I could be aptly described as neo-Cartesians. I tape, therefore I am."

Good Chicago wit, that. We were lucky to have him.

Posted by Timmi Duchamp at 6:16 PM