The Pleasures of Reading, Viewing, and Listening in 2022, pt. 27: Nancy Jane Moore 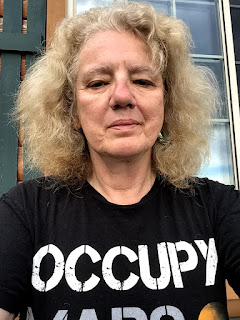 The hardest thing about writing this report is that there are many books in my house that would make it if only I had found time to read them. For all that I read a lot, the books pile up faster than I can get to them. This problem isn’t helped by the fact that I live in easy walking distance of five bookstores and three branches of the public library or by the ease of downloading ebooks.

Nonetheless, I will comment on some of the ones I did get around to, starting with the one I was in the process of reading when I wrote last year’s report: The Dawn of Everything by David Wengrow and the late David Graeber. I said last year that it was the best book I’d read all year even though I hadn’t finished it. Now that I have finished it, I will say it’s one of the best books that I have ever read. It will shake up everything you think you know about human history and make you start thinking of all the ways we could live differently if we put our minds and efforts to it. Obviously it is a must read for science fiction writers and anyone thinking about how we should be changing things in the future.

Another important read for thinking about how we should approach the changes we need to make in the way we human beings live on Earth is Kim Stanley Robinson’s The Ministry for the Future. It’s fiction, but the events in this book – particularly the disasters – are all too realistic. Even in the face of climate change, Stan is an optimist of sorts, and this book will give you some hope that we might muddle our way through the next century.

Something else that struck me about Ministry: it is clearly a book by a master writer at the top of his game. There are a number of different points of view in this book, and different chapters are told in different tenses as well as by different persons. While the structure is complicated, it is also obvious that the book came together exactly as the author intended. This book is worth reading not just for the a thoughtful and provocative take on how to handle our polycrises, but also as a master class in writing complex novels.

Another book that struck me as a writing tour-de-force was Karen Joy Fowler’s Booth. I sat up until 2 a.m. finishing this book even though I obviously knew how it ended. The truth is, I only read it because Karen wrote it and I made it a rule long ago to read everything she writes, a rule that has never failed me yet. As with Ministry, this is a book in which the author knew exactly what she wanted to do and did it. Read it even if you’d swear you don’t care about the family of John Wilkes Booth.

I hadn’t read William Gibson in some time, but this year I got around to The Peripheral (before I knew about the TV series, which I haven’t seen). It was yet another book that made me think the author had done exactly what he intended to do. As Ursula K. Le Guin observed, science fiction is about the present, and The Peripheral and its sequel Agency captured the high tech world (and the people left out of it) all too well. I am impatient for the last book in the Jackpot series, though not at all sure I going to enjoy where it takes me or what it says out our current and forthcoming reality.

I first read The Silverberg Business by my good friend Robert Freeman Wexler years ago when it was novella-length and still a work in progress. It was very good then, but the final novel version is even better. A story that combines the history of Jewish settlement in Texas in the nineteenth century (and yes, that was very much a thing) with the hurricanes that hit Indianola (once a rival to Galveston) and Robert’s trademark surrealistic fantasy gives you a take on Texas that is much richer than the outsized mythology that long ago wore out its welcome.

I’ve been a fan of Percival Everett ever since I discovered his short stories years ago, but I had no idea he’d written so many novels. Turns out he’s written a lot of them. This year I read two of them: The Trees, which begins with those responsible for the death of Emmitt Till getting their just rewards and goes on from there to many other lynchings, and Dr. No, which is about a math professor who studies nothing and another man working on becoming a Bond villain. These books use speculative elements and incredible wordplay (“Nothing is not something.”) to provide absurdist stories that do not shirk at addressing racism. Nobody else writes like Percival Everett.

Two other nonfiction books I read this year left a deep impression. One was There Are No Accidents by Jessie Singer in which the author points out that our ongoing toll of traffic deaths – especially those of pedestrians and bicyclists – are the result of decisions we’ve made about structuring our roads in favor of fast-moving cars. She goes on to talk about other systems that cost lives and even includes a section on one of my favorite topics: the need to learn how to fall to protect oneself from serious injury.

The other was Lady Justice by Dahlia Lithwick, which tells the story of a number of women lawyers who have done the hard work of fighting back against the authoritarian turn in the United States. As someone who went to law school when few women did, I am cheered not just by the fact that a percentage of women lawyers are choosing to do the kind of work that does good rather than the kind that makes big money but by the fact that there are so many of them that they have a solid network.

Getting back to fiction, I also read Spear because it’s never a mistake to read anything Nicola Griffith writes. I was not disappointed. She managed to write an Arthurian story that, for all that it has lovely fantastical elements, is likely closer to the real Arthur (if there was one) than any of the others. Amazing magic coupled with the grit of life in the first millennia of the common era, structured around a woman hero who chooses her own path – a glorious read.

Two recent Aqueduct books also gave me great pleasure. Damned Pretty Things by Holly Wade Matter is one of those books that doesn’t feel like anything I ever read before. And Gwynne Garfinkle’s Can’t Find My Way Home managed to convey the politics and other upheavals of the 1960s in a way that few books about that time have managed.

One of the trends that I’ve enjoyed over the past few years is the publication of stand-alone novellas – something that Aqueduct did early on but that now is being done by the big publishers as well.

I first ran into Comeuppance Served Cold by Marion Deeds before it came out when she read a section of it at a group reading. I caught the traces of Dashiell Hammett’s world and figured I would love it. Add magic and fantastical creatures to the corrupt world of the 1920s that underlay Hammett’s stories and do it with a tough woman in the detective role and a deep understanding of the racism and homophobia of the time and you have a perfect adventure story. I want another one!

And the latest monk and robot book from Becky Chambers – A Prayer for the Crown-Shy – shows that it is possible to write positive future stories without sacrificing the complexities of humans (and sentient robots). Both Becky Chambers and Stan Robinson give me hope for the future, just in very different ways. Science fiction contains multitudes!

As an end note: Right now I’m reading two books – The 1619 Project, edited by Nikole Hannah-Jones, and An Indigenous People’s History of the United States, by Roxanne Dunbar-Ortiz – at the same time for an ongoing anti-racism discussion group. We’re reading a couple of chapters from each book for each meeting. The effect of reading these two excellent books at the same time is quite powerful. I recommend it. 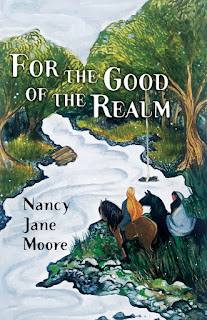 Nancy Jane Moore is currently working on a sequel to her 2021 Aqueduct novel For the Good of the Realm. She blogs most Fridays at treehousewriters.com and has been publishing a daily senryu (a form similar to haiku) on social media for the last seven years. Her other Aqueduct books are the novella Changeling and the science fiction novel The Weave. In another life she practiced law and worked as a legal journalist. She holds a fourth degree black belt in Aikido. Having grown up outside of Houston near the Gulf of Mexico and having lived for many years in Washington, DC, within an easy drive of the Atlantic Ocean, she is now on her third coast, living in Oakland, California, with her sweetheart.