For the Good of the Realm by Nancy Jane Moore 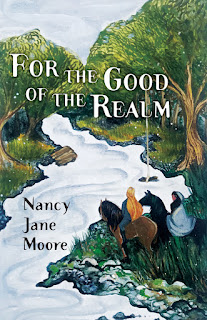 I'm pleased to announce the release of For the Good of the Realm, a novel by Nancy Jane Moore, in both print and e-book editions. It's now available for purchase from Aqueduct Press at www.aqueductpress.com.

Anna d’Gart is both skilled with the sword and shrewd (not to mention discreet), a rare combination among the hot-tempered and rowdy Guards serving the King, Queen, and Hierofante, which is why she’s always the Queen’s first choice for carrying out sensitive assignments. Discovering that someone powerful is using magic to damage the Queen, Anna is plunged into political intrigue and a series of tough decisions. No fan of the uncanny, she’s forced to enlist the assistance of a witch—whose magical practices are strictly prohibited in the Realm and condemned by the Church.

With the aid of her flirtatious friend and fellow Guardswoman Asamir and their friends Roland de Barthes and Jean-Paul of the King’s Guard, Anna repeatedly matches wits with an opponent too powerful to be named. Intent on preventing war, preserving the Realm, and protecting the Queen despite the risks to herself and her fears about the ancient way of magic, Anna deploys all the means at her disposal—espionage, diplomacy, her sword, a powerful witch, and, of course, indomitable bravery.

For the Good of the Realm is a splendid, swashbuckling romp that captures the very spirit of the Musketeers. The author weaves palace intrigue, swordplay, romance and divided loyalties into a deeply satisfying fantasy adventure with women at the center of the narrative, wielding and negotiating power.--Tansy Rayner Roberts, author of Musketeer Space and The Creature Court Trilogy

For the Good of the Realm is a sparkling tournament of a novel, full of thrills as well as feats of storytelling bravado. Moore has invented a feminist medieval otherworld that is egalitarian in its sword and sorcery, yet political intrigue ultimately rules as Anna, a stalwart member of the Queen’s Guard, collaborates with a range of surprising characters to foil the nefarious plots of a power-hungry Hierofante. Spirited and funny, this is a great read. —Lesley Wheeler, author of Unbecoming

This lighthearted, female-led fantasy adventure from Moore (The Weave) follows a pair of Queen’s Guards—staid, circumspect Anna and feisty, impulsive Asamir—as they become embroiled in the machinations of the rulers of Grande Terre. As the threat of war looms and a sinister undercurrent of forbidden magic becomes harder for Anna to ignore, the two women must out-fight and out-think the enemies of the realm in a series of duels and cloak-and-dagger intrigues. Moore’s plotting is relatively pared back, focusing on a handful of characters and a single political moment; it’s a refreshing counterpoint to the world-ending bombast of much secondary-world fantasy. The sword fights and worldbuilding will appeal to fans of fantasies of manners in the vein of Ellen Kushner’s works and historical adventure à la Dana Stabenow’s Silk and Song....With a principal cast of mostly women, this is sure to appeal to readers looking for stories of empowered female characters that go beyond simply giving them swords. —Publishers Weekly, March 2021

Writers Drinking Coffee interviews Nancy in the ninety-third episode of their podcast. Listen to it here.

Nancy will be reading from For the Good of the Realm on Sunday, July 25, in an online event sponsored by FogCon.